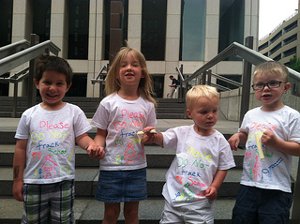 Outraged by a plan to conduct fracking next to an elementary school, families in Erie, Colorado are conducting a well-orchestrated campaign aimed at stopping it. With their children wearing t-shirts reading “Don’t Frack My School,” parents and the national consumer advocacy organization Food & Water Watch recently delivered more than 21,000 petitions to the head of the company that intends to frack a well located next to Red Hawk Elementary School in Erie.

After delivering the petitions to Encana president Jeff Wojahn, members of Erie Rising and Food & Water Watch brought copies of the petitions to Colorado Governor Hickenlooper, along with a personal invitation to attend their June 2 rally to stop fracking in and near Erie’s backyards and schoolyards.

“Erie Rising believes that Encana can’t ignore the voice of 21,000 people to abandon the Canyon Creek well site. We stand together as mothers and as a community in continuing to the ask them not to drill near our school yards,” said Jen Palazollo.

Erie Rising describes itself as a “parent-powered” grassroots organization dedicated to protecting children, health, the environment and the community.

The groups charge that the proposed fracking will threaten the health, safety and wellbeing of hundreds of children in Erie.

“The evidence that fracking and related oil and gas activity contaminates drinking water, poses serious health risks, and pollutes our environment is undeniable and growing throughout Colorado and across the country,” said Sam Schabacker, Mountain West Region Director with Food & Water Watch. “There are 48,000 fracked wells in Colorado. We are drawing a line in the sand and saying that Encana can’t have this one.”

Food & Water Watch says if Encana does frack the well as planned, thousands of trucks will pass within a few hundred feet of the elementary school annually.

“A recent analysis by the New York Times found that safety exemptions for oil and gas truck drivers that allow them to drive exhaustingly long hours has caused a spike in truck accidents—the leading fatality in the industry,” according to a statement from the group. “In addition, the air contaminants released from this well could float to neighboring Erie Elementary with the prevailing west wind. A recent study from NOAA found that the amount of certain air contaminates in Erie is 10 times higher than in Houston, Texas—likely because of the oil and gas activity in the area."