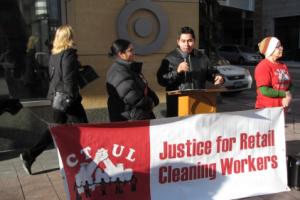 In mid-January, in a press conference in front of Target Corporation headquarters in downtown Minneapolis, over two dozen employees of retail cleaning companies that clean Target stores in the Twin Cities metro area announced OSHA complaints that were filed January 17th. The complaints allege that workers, who are employees of the cleaning contractors, are locked in the Target stores and must find a manager to unlock doors if there is a need to exit the building. Further, many workers claim that they were never informed of where any emergency exits are, according to a press release issued by of the low-wage worker led organization Centro de Trabajadores Unidos en la Lucha (CTUL).

In its 2011 Corporate Responsibility Report, Target notes, “Our business partners must provide safe and healthy workplaces that comply with local laws.”

At the press conference, janitors called on Target to only contract with responsible contractors as their public statements have indicated previously. A delegation of workers entered the headquarters building to deliver that message before the press conference.

“Sometimes I am told to work cleaning the store all night long,” said Marco Tulio Perez, an employee of Carlson Building Maintenance who cleans a Target store in the Twin Cities metro. “When that happens, the doors are locked and we cannot get out unless we call someone to come let us out. I don’t know what would happen if there was a fire or some other emergency. That’s really dangerous. What if we can’t reach the person? I guess that would be the end of us!”

In December of 2010, a fire in a Bangladesh factory that supplied clothes to Minneapolis-based Target killed 29 workers who could not escape because of locked doors.

“Target claims to have cracked down on safety violations by suppliers, yet here we have complaints from 25 workers alleging they are locked inside of Target stores right here in Minnesota,” said Lucila Dominguez of the low-wage worker led organization Centro de Trabajadores Unidos en la Lucha (CTUL). “What would happen if a fire were to break out in one of these stores?”

CTUL is a low-wage worker led organization based in the Twin Cities that is organizing for fair wages, fair working conditions, and a voice in the workplace for all workers.