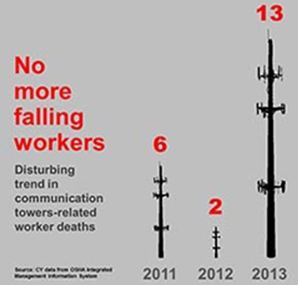 Kathy Pierce expected her son, Chad Weller, to come home on March 19, 2014, at the end of his shift as a cell tower climber. But Weller, always ready with a smile for his mother, never came back. He was sent up alone to fix a communication signal on top of a water tower in the rain while wearing a harness two sizes too big - and he lost his life in a fatal fall. Chad Weller is one of 11 workers who have lost their lives in 2014 while constructing or repairing cell towers. Thirteen died in the previous year, including Bridgette Hester's husband, who was killed as he worked on a tower that was struck by a vehicle and collapsed.

Kathy Pierce and Bridgette Hester joined the Department of Labor, the Federal Communications Commission and leaders in the telecommunications industry, including major carrier AT&T, at an unprecedented joint event today focused on new and continuing efforts to prevent worker fatalities on cell towers. U.S. Secretary of Labor Thomas E. Perez and FCC Chairman Thomas E. Wheeler spoke at the event to announce a new working group that will collaborate in the development and implementation of recommended safety practices for the growing telecommunications industry.

Want to participate in OSHA’s Safety Stand-Down to Prevent Falls in Construction?

Heat exposure has killed hundreds of U.S. workers — it’s time to do something about it