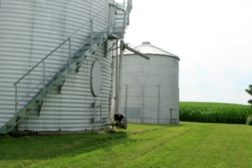 He walked into the grain storage bin on his own two feet, but left in an ambulance. A 35-year-old employee of the Beattie Farmers Union Cooperative had to have all the toes on his left foot amputated after his foot became entangled in an auger that was inadvertently turned on while he was cleaning out a bin.