Meeting the goals of the Paris Agreement could save about a million lives a year worldwide by 2050 through reductions in air pollution alone, according to the World Health Organization (WHO). The organization says latest estimates from leading experts also indicate that the value of health gains from climate action would be approximately double the cost of mitigation policies at global level, and the benefit-to-cost ratio is even higher in countries such as China and India.
Read More 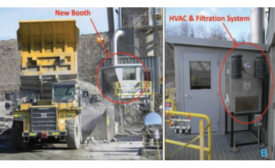 In the 1960s cartoon The Flintstones, Stone Age man Fred Flintstone worked in a quarry while sitting in the open booth of a rock-crusher machine. Presumably, the animators based Fred’s booth on the open designs typical of the 1960s. If they had created it in the 2000s, however, Fred’s booth would have looked vastly different, notwithstanding the fact that his booth was atop a brontosaurus.
Read More

Baby’s on the way—What about your respirator?

Pregnant women may turn to maternity clothes for comfort but may wonder whether they need a new respirator in the workplace.

A county employee who works at the Lucas County (Ohio) Job and Family Services building has been hospitalized for nearly two weeks with pneumonia while some 19 others have called in sick with upper respiratory problems over the past six weeks, county officials told the Toledo Blade.