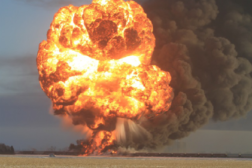 The Dec. 30th train accident near Casselton, North Dakota caused an estimated $6.1 in damage – and promoted the evacuation of 1,400 residents. A preliminary report issued by the National Transportation Safety Board (NTSB) lays out the facts and figures behind the derailments and collision involving two BNSF Railway trains, but does not identify a cause.