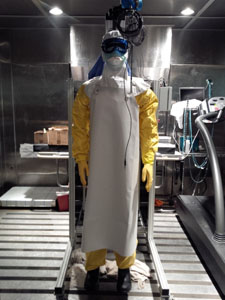 The current Ebola epidemic in West Africa is the largest in history and is unprecedented in many ways, including the large number of healthcare workers who have been infected while treating patients. The large scale of the epidemic, as well as the two healthcare workers who contracted Ebola while caring for the first case in the United States, has directed particular attention to the personal protective equipment (PPE) used by healthcare workers to reduce their risk of infection. PPE is designed to create a barrier to prevent pathogens from entering the body through the mucous membranes or broken skin. Examples of PPE used for Ebola include (but are not limited to) gloves, gown/coverall, mask/respirator, apron, faceshield/goggles, and cap/hood (see Figure 1). Reports from healthcare workers in West Africa indicate that some personnel are able to wear their PPE for only 40 minutes at a time because of the high ambient temperature and humid conditions. Even in the United States, where management of patients with Ebola is done in air-conditioned environments, uncomfortable PPE is a common complaint and causes additional burden for healthcare workers.

On September 26, 2014, in a speech at the Global Health Security Agenda Summit, President Obama announced a “Grand Challenge” to design improved PPE for use by healthcare workers during treatment of Ebola patients.

“And today, I’m pleased to announce a new effort to help health workers respond to diseases like Ebola. As many of you know firsthand, the protective gear that health workers wear can get incredibly hot, especially in humid environments. So today, we’re issuing a challenge to inventors and entrepreneurs and businesses of the world to design better protective solutions for our health workers. If you design them, we will make them. We will pay for them. And our goal is to get them to the field in a matter of months to help the people working in West Africa right now. I’m confident we can do this.”

The National Institute for Occupational Safety and Health (NIOSH), along with other offices in the U.S. Centers for Disease Control and Prevention (CDC), is partnering with the U.S. Agency for International Development (USAID), the White House Office of Science and Technology Policy (OSTP), the U.S. Department of Defense (DOD), and other U.S. agencies on the…Click here to read the rest of the post.

Obesity is a risk factor for the development of asthma