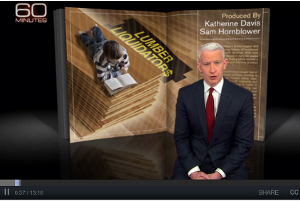 The construction industry  and homeowners are reevaluating the safety of materials distributed by a top supplier after a scathing report by CBS News program “60 Minutes.”

Reporter Anderson Cooper contended that some of the laminate wood sold by Lumber Liquidators contained potentially hazardous levels of formaldehyde, a known carcinogen. The flooring tested by 60 Minutes was manufactured in China.

“60 Minutes” accused the company’s Chinese suppliers of deliberately mislabeling the laminate as being in compliance with California’s strict standards on formaldehyde levels in wood products. Those standards which were adopted by the EPA in 2010 but have still not gone into effect, due to opposition from industry groups.

In news reports, the company disputed the test results and saying the issue was being driven by investors attempting to manipulate its stock price. Lumber Liquidator shares fell dramatically after the report aired.

Elliot F. Kaye, chairman of the Consumer Product Safety Commission, called on the federal government to investigate whether the flooring is safe in homes.

In a letter sent to regulators on Wednesday, Senator Bill Nelson (D-Florida) has asked the heads of the Consumer Product Safety Commission (CPSC), the Centers for Disease Control and Prevention (CDC), and the Federal Trade Commission (FTC) to test the company's flooring.

Nelson is a ranking member of the Senate Committee on Commerce, Science, and Transportation.

In his letter, Nelson writes:

In past Congresses, the Senate Committee on Commerce, Science and Transportation has held numerous hearings on defective drywall imported from China. Unfortunately, the laminate flooring sold by Lumber Liquidators bears resemblance to that defective product, which was widely installed in Florida homes, caused metal corrosion, and negatively impacted public health. Furthermore, the drywall debacle also showed that Chinese manufacturers often refuse to stand behind their products — even when they cause great harm to American consumers. We must not repeat the Chinese drywall experience.

Accordingly, I ask that your agencies independently investigate and test these specific Chinese wood laminate products to determine if they present a risk to the public under the Consumer Product Safety Commission's (CPSC) authority under the Federal Hazardous Substances Act or the limits prescribed by Congress in the Formaldehyde Standards for Composite Wood Products Act. In so doing, we request that the CPSC, in collaboration with the Centers for Disease Control's Agency for Toxic Substances and Disease Registry and the EPA, replicate the cooperative, inter-agency initiative that tested defective Chinese drywall.