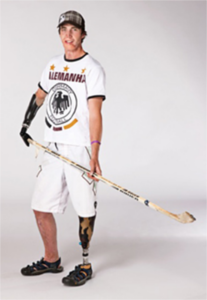 Curtis Weber is from a monochromatic landscape where the Canadian sky blends into the rollicking fields, where the horizon is only interrupted by grain silos and round bales of hay. As a 17-year-old, he knew the fields well.

In the summer of 1999 Weber went to work like his father before him building grain bins on the Saskatchewan prairies. The summer job was a means to an end – the end being a spot in the junior hockey league in Alberta that fall.

Weber and a work crew spent the day on rural farmland building grain bins from the top down. The towering cylinders of sheet metal and bolts were assembled by the hands of a six-person crew and a crane.

Weber steadied the hopper bottom- or grain funnel – as the crane operator transported the top piece of the bin underneath a power line. Just before transporting the bin, the crew discussed how “the power line had the potential to kill somebody.”

That someone was Weber. The crane operator failed to lower the boom and backed into the power line.

Weber became the ground point for the electricity, as 14,400 volts surged through his body.

The first 14,400 volt cycle was shared by Weber and two co-workers who were ejected from the worksite. His co-workers suffered minor burns; one lost serveral toes and spent weeks in the hospital.

Weber took the second and third hits alone – receiving just over 40,000 volts total. Each cycle violently threw Weber like a ragdoll from one steel bin to another.

“It looked like he was in an orb of fire probably 10 to 12 feet bouncing around him,” said Mike Spainer, a co-worker on the scene. “Finally he hit the ground and completely grounded it [the electricity]. That blew the transformer and started a grass fire half mile down the road.”

Weber landed face down in the field; his bare chest deflated. A cloud of smoke rose from his body, which was only protected by swim trunks and running shoes.

The silver chain he wore around his neck embedded into his skin. It would take three months for hospital physicans to remove the chain from his body.

The owner of the farm heard Weber’s screams from inside his home. The flickering lights signaled they had hit the wire. Workers scrambled to revive Weber’s bright red body, inflicting unintentional damage with each embrace.

“Whenever we touched him, his skin would fall off his hands and arms,” Spainer said. “It was like ripping off sheets of Saran wrap.”

Paramedics arrived on scene and rushed Weber to a hospital in Saskatoon, but his struggle to survive had only just begun. His kidneys shut down. A tracheal tube provided oxygen to his brain, and a feeding tube fed to his charred body.

He spent the next six weeks in a medically-induced coma to protect his brain from swelling. The electrical burns ripped through the skin on his face, exposing his jaw bone and eliminating the right side of his nose. Third and fourth-degree burns covered more than 60 percent of his body, and he was given zero chance to survive.

The high voltage claimed more than flesh and bone.

“The electricity entered through the right side of my body and out through the left,” Weber said.

“Any muscle that wasn’t burnt or removed was just completely useless,” he said. “From that point on I was going in for surgeries almost every other day.”

Weber’s coma as lifted six weeks after the accident. Friends and family barely recognized his face, but quickly discovered the spirit behind his soft green eyes, and humor behind his charming Canadian drawl remained. Doctors feared he didn’t understand the severity of the situation.

“My mom asked if I knew where I was and how bad my injuries were,” Weber said. “I remember nodding yes because I saw the looks on people’s faces. That was the first time they gave me the mirror…”

“That’s when I realized my arm was gone - in that moment I was thinking, ‘how am I going to hold my hockey stick or cast a fishing pole again?’”

The simplest tasks, like lifting his head off the pillow, took weeks to re-learn.

Weber learned to tie his shoes with one hand and to walk with a prosthetic leg and foot. He was released from the hospital six months after his injury.

“They saved my life, but that was the beginning of the recovery,” he said. “For the next five years I received 14 reconstructive surgeries in Toronto. Some were up to 12 hours long and the recovery time was 4 weeks in the hospital.”

Doctors reconstructed his chin and amputation stumps. Eventually, he received a prosthetic arm and hand to hold his hockey stick.

Later, he was approached by the Provincial Workers Compensation Board and shared his story with the public for the first time in 2007. Since then he has worked as a safety trainer, spokesperson, and consultant for Return to Work organizations, and in industries as varied as healthcare, oil, gas, and construction.

Today, the husband and father of two, operates his own safety consulting firm, C Weber Consulting, in Saskatchewan, and delivers presentations on his story across North America. He strives to create a culture where workers – especially young workers – can raise questions about safety concerns without judgment or fear of retaliation.

“We knew the hazard was there but didn’t put the steps in place to prevent it…” he said. “Make sure you take the opportunities to ask questions. If you feel uncomfortable, or unsafe doing something, or not properly trained, make sure you voice that concern; because I don’t have the opportunity to go back.”

Every year on April 28, the American Federation of Labor & Congress of Industrial Organizations (AFL-CIO) observe Workers Memorial Day to remember those like Curtis Weber who have suffered, or died on the job. The event aims to renew national efforts to create safe workplaces. For more information, visit AFL-CIO.