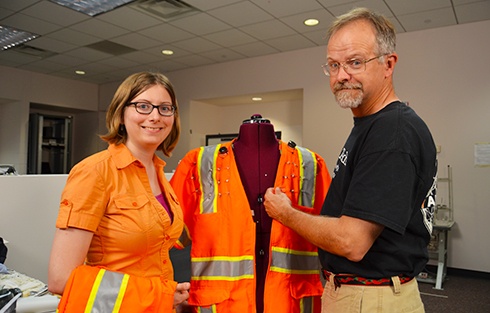 Working at a construction site is loud, dirty, and often dangerous. Roadside construction workers deal with the added risk of being struck by car or truck as it passes through a work zone, its driver unaware or ignoring flags, cones, or other warnings.

(At right: Doctoral student Kristen Hines and Professor Tom Martin, both with the Bradley Department of Electrical and Computer Engineering, discuss the current version of the InZoneAlert. These sensors are about the size of a cellphone. Future incarnations could be smaller than a pack of gum, Hines says.)

Fatalities happen: 579 people were killed in highway work-zone related incidents in 2013, according to the American Road & Transportation Builders Association.

Virginia Tech researchers want to cut that statistic by combining ever-shrinking radio sensors that construction workers can wear on or inside vests with connected vehicle technology that allows cars to “talk” to one another, roadside infrastructure, and personal electronics such as mobile phones.

The idea: If a collision is about to occur between a vehicle and a worker, the vest can warn the worker in a matter of seconds, thus saving a life. Likewise, the motorist will receive a dashboard notification. The instantaneous alert is possible by short-range communication.

“Any warning we can give them is better than no warning at all,” said Kristen Hines of Clarksville, Tennessee, and a doctoral student with the Bradley Department of Electrical and Computer Engineering, who is helping lead the combined effort of the College of Engineering and the Virginia Tech Transportation Institute.

The size of a pack of gum

The InZoneAlert vest has seen numerous changes in its design and intended use. As of 2014, the vest portion of the alert system — which incorporates GPS tracking — had evolved from that of a backpack-sized apparatus to the size of a cell phone. New incarnations could shrink it to the size of a pack of gum.

The vest or similar clothing with GPS-oriented dedicated short-range radio could have wide-ranging uses.

“There are a lot of roadside workers who are not necessarily on construction sites who could benefit from such a warning,” said Tom Martin, a professor with the College of Engineering who researches “smart” clothing — that is, wearable items with woven-in electronic components that can provide data such as a person’s movements. “There are folks monitoring the status of interstates, policemen [and] first responders. Anyone who has to be out on the interstate with passing vehicles could benefit from an individualized warning.”

Martin started the effort in 2013 with then-doctoral student Jason Forsyth, who graduated in 2015 with a doctorate in computer engineering and is on faculty at York College in Pennsylvania.

The team wants to make the InZoneAlert vest user-friendly, part of a worker’s established uniform or equipment. The alert itself also must be distinct but not jarring.

Various alerts are being tested and must work within a loud, tough, dirty, and busy construction site.

“One possible way to get over that challenge is to use other things that the worker is using,” said Hines. “Let’s take the hearing protection for example. The auditory alert could be placed inside of the hearing protection in a work zone, which means that it can always be heard over everything. Another possible way is to include other alerting methods, such as tactile alerts that use a person’s sense of touch. This ranges from vibrations or your clothing suddenly shrinking on you [or] cuffs compressing.”

Testing in the real world

The Virginia Tech Transportation Institute will be key in testing the vest in real-world demonstrations that involve highway-speed traffic. The institute already is spearheading work on vehicle-to-vehicle to vehicle-to-infrastructure communication at the Virginia Smart Road in Blacksburg, as well as the Interstate 64 corridor near Fairfax, Virginia. Closed-course tests would occur on the Smart Road.

“We have been simulating the concept in demos done on the Smart Road along with other applications such as animal detection, collision avoidance, etc.,” saidAndy Alden, a researcher with the institute.

Funding for the project has so far comes from inside the College of Engineering, transportation institute, and Virginia Tech’s Institute for Creativity, Arts, and Technology, the latter of which Martin is associate director. The researchers are seeking support from the federal and Virginia units of the Department of Transportation.

“Roadside deaths are a major problem and the advent of connected vehicle [technology] has opened up new opportunities for a technical solution that will save lives,” said Alden, adding that with proper investment, the vest could start appearing along highways within five years.