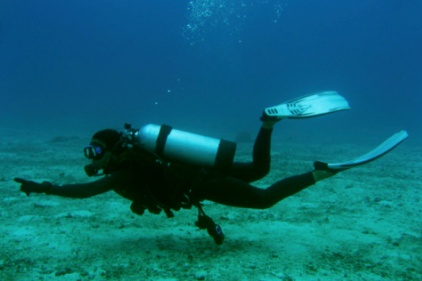 A small group of veterans with spinal cord injuries who underwent a four-day scuba- diving certification saw significant improvement in muscle movement, increased sensitivity to light touch and pinprick on the legs, and large reductions in post-traumatic stress disorder (PTSD) symptoms, according to Johns Hopkins researchers.

The researchers, while calling the advances made over the course of a few days “dramatic,” caution that the results are preliminary, the study size small and the duration of the benefits are unknown. Still, they say, the findings suggest there may be a pathway for restoring neurological and psychological function in paraplegics that has been overlooked thus far.

“There is no treatment for people with chronic spinal cord injury and many believe once you’ve lost the communication between the brain and the extremities, there is nothing you can do to restore lost function,” says Adam Kaplin, M.D., Ph.D., an assistant professor of psychiatry and behavioral services at the Johns Hopkins University School of Medicine. “What we saw in the water strongly suggests there is some scuba-facilitated restoration of neurological and psychological function in paraplegics. It’s very provocative.”

Kaplin, who will present the findings at the Paralyzed Veterans of America conference on Sept. 17 in Orlando, emphasizes that his team cannot “establish beyond a shadow of a doubt that what we saw is reproducible or durable.” Nor could he explain how the scuba effects may have worked, though he and co-researcher Daniel Becker, M.D., head of Pediatric Restoration Therapy at the International Center for Spinal Cord Injury (ICSCI) at Kennedy Krieger Institute and an assistant professor of neurology at Johns Hopkins, hope to do a larger randomized study to test their hypotheses.

The study was the brainchild of Cody Unser. Unser, now 24, suffered an acute attack of transverse myelitis—a neurologic syndrome caused by inflammation of the spinal cord—that, more than a decade ago, left her paralyzed from the chest down. The progeny of car-racing royalty, Unser told Kaplin that she regained some feeling in her legs when she went scuba diving. Kaplin says he was skeptical at first, but Unser brought him to a scuba training session in Pennsylvania to talk to other wheelchair-dependent people who told him the same thing. He was intrigued.

The Cody Unser First Step Foundation, which is involved in education and research about disability in general and transverse myelitis specifically, offered to sponsor a pilot study to see if there was any credibility to the anecdotal evidence of the paralyzed divers.
Kaplin and Becker collected their data in the Cayman Islands in May during a scuba certification trip for disabled veterans sponsored by Unser’s foundation. There were 10 wheelchair-dependent participants who had suffered a spinal cord injury an average of 15 years earlier and nine healthy “dive buddy” control subjects.

Before the dives, Kaplin and Becker conducted a series of neurological and psychological tests on all 19 subjects. They measured muscle spasticity, motor control and sensitivity to pinprick and light touch, as well as symptoms found in depression, obsessive compulsive disorder, hostility and PTSD. Then the participants underwent scuba certification, which included a series of nine dives over the course of four days. Eight of the 10 paraplegics ultimately completed the dives.

At the end, all 19 participants were reassessed.

“We saw dramatic changes in a matter of days in a number of people with spinal cord injury who went scuba diving,” Becker says. “This is just a pilot study, but to see such a restoration of neurological function and significant improvement in PTSD symptoms over such a short period of time was unprecedented.”

The researchers saw an average 15 percent reduction in muscle spasticity in those disabled veterans who went diving and an average 10 percent increase in sensitivity to light touch and five percent to pinprick. In some individuals the improvement in tone, sensation or motor function was between 20 and 30 percent. The healthy controls experienced no neurologic changes.

The researchers also found an average decrease of 15 percent in obsessive compulsive disorder symptoms in the disabled divers, a similar decrease in signs of depression, and an overall decrease in mental problems using a validated psychological assessment.

Kaplin concedes those improvements may have been influenced by the fact that the subjects were taken on a Caribbean vacation and got to go diving on a beautiful reef. But the most striking psychological impact was seen in PTSD symptoms, which decreased, on average, by 80 percent in those veterans who went diving. Escaping to a tranquil beach setting, Kaplin says, wouldn’t be enough to account for such an apparent escape from PTSD symptoms.

“They were challenged with something that made them anxious and they mastered it,” Kaplin says. He adds that the regulated breathing needed to make the body buoyant and to control movement in the water may have also helped to relax the veterans and made them better able to control their symptoms.

The researchers say they don’t really know how to explain the effect scuba diving may be having on the bodies of those with spinal cord injuries. Kaplin says it is possible that weightlessness in the water may play a role in improvements found in paraplegic veterans. Deep in the water, divers are buoyant and don’t have to fight gravity, while the water allows for a kind of global resistance training they can’t experience on land. They can also better fill their lungs in the water since their breathing isn’t hindered by sitting in a wheelchair. It is also possible that increased oxygenation of tissues from the pressurized air may have resulted in the improved muscle tone, strength and sensitivity the researchers identified.

The researchers would like to do a follow-up study which would compare results after scuba, snorkeling and time spent in a hyperbaric chamber simulating underwater dives. These may be able to tease out what role may be played by exercise and what role may be played by air pressure.
“Is there something healing happening under there?” Becker asks. “There’s a signal but only by repeating these results and showing significant improvements can we establish that. It’s too early to know for sure.”