Posted with permission from The Current:

In the mid-1990s the rash of symptoms were the calling card for a group of Southwest Airlines employees working at the airline’s San Antonio reservations center. Many blamed the building, the mold, frequent pesticide foggings, and bacteria in the air vents for forcing them to leave their jobs suffering a cloud of painful conditions. Now 18 years later, members of the so-called “San Antonio Seven” who sued and lost their case against the airline are finding they are likely permanently disabled. “I don’t think chemical sensitivity can be cured,” said Olivia Cornyn, sister to U.S. Senator John Cornyn. “Once your TILTed, you’re always TILTed.”

TILT refers to Toxicant Induced Loss of Tolerance, more commonly referred to as Multiple Chemical Sensitivity, a disorder that is brought on by exposure to chemicals in the environment. And though the research community has been picking away at the problem for more than 30 years, and the U.S. Department of Defense’s war against granting disability benefits for Gulf War veterans claiming chemical poisoning gave the illness high visibility for a time, TILT and MCS are still far from popularly understood. Try explaining to the local daycare worker how their petroleum-based cleaners could send you to the ER. Or watch the busboy’s face when you ask him not to scrub down your table with bleach. You’ll see.

Cornyn, an accomplished artist, returned to San Antonio in 1989 to care for her mother after her father passed away. Soon after taking her job at Southwest, however, the energetic and upbeat woman grew increasingly tired, irritable, and pain-ridden. Soon her mother was doing laps around her. And Cornyn was finding it difficult to simply care for her son. “She was so into doing her Texas line dancing and all, but I didn’t have the energy to do it,” Cornyn said. “My son grew up saying he was the kid with the dirty jeans because I couldn’t care for him.” At first, sickened employees thought it was the cigarette smoke at work that was getting to them. The smoke you could see. And the building was so tightly designed, it seemed to circulate through the building eternally.

Leah Burt started with Southwest when the building opened in 1981. She developed regular and severe sinus infections almost immediately. Exhaustion and regular colds she wrote off to the long hours, the stress, the smoking. “That in itself can make you really sick,” she said. “I couldn’t afford to quit.”

Over time Cornyn’s irritability progressed into more troubling symptoms. “I couldn’t sleep. I was having chronic pain in my hand,” she said. One day she made the mistake of eating a sugar substitute and wound up in the emergency room for three hours writhing in agony.

Meanwhile, Southwest discovered bacteria and mold — including Stachybotrys, the so-called “black” mold, listed by the U.S. Centers for Disease Control as problematic for those with compromised immune systems but regularly linked to more troubling public-health events — lurking behind ceiling tiles, carpeting, insulation, and throughout the heating and cooling system. They began to rehab, frequently during business hours, according to former employees and veteran journalist Arnold Mann, who chronicles the ordeal in his new book “They’re Poisoning Us: From the Gulf War to the Gulf of Mexico.”

Read the full story of the "San Antonio Seven">> 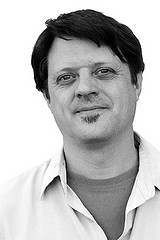 Greg Harman is Editor of the Current

From radwaste salt domes under New Mexico’s deserts to the ravaged oil patch of West Texas and the lingering fallout of Agent Orange exposure in Mississippi, Harman has been writing about the state of our environment since his high-school fanzine days. After several years studying the watering holes and truck stops between Texas and Wyoming, Harman finagled an English degree out of Texas Wesleyan University in Fort Worth and began accepting honest pay for wedding words on flickering screens … a long way from his Kaczynskiesque Greyhound-station scribbling days. Since joining the Current as a staff writer in 2007 (after stints at weekly and daily papers in Houston, Las Vegas, Biloxi, Odessa, Pecos, and Alpine), he has been named a print journalist of the year by the Houston Press Club for his series on the border wall (“Muro del Odio”); his work on CPS Energy — particularly worker safety issues — earned him a national public service award from the Association of Alternative Newsweeklies; and his three-part series on the nuclear fuel chain that ran between 2009 and 2010, starting with “Nukes Mean Mines,” was selected among the best environmental reporting of the year in 2010 by the Natural Resources Defense Council’s OnEarth magazine. He was named editor of the Current in January of 2011, but promises to quit the news-writing business just as soon as victimization and despair cease to be a natural outflow of economic progress. He wants you to be happy and not drive so blinkin’ fast