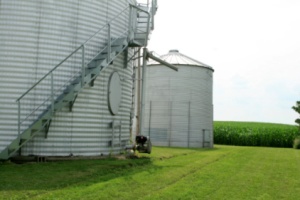 A grain elevator explosion that killed six workers and left two others hospitalized has earned an Atchinson, Kansas company $406,000 in proposed fines.

The company allowed grain dust – which is nine times as explosive as coal dust – to accumulate, using compressed air to remove dust without first shutting down ignition sources, jogging (repeatedly starting and stopping) inside bucket elevators to free legs choked by grain, using electrical equipment inappropriate for the working environment and failing to require employees to use fall protection when working from heights.

The serious violations involve a lack of proper preventive maintenance, certification and lubrication of grain handling equipment; inadequate emergency action plan training for employees and contractors; a lack of employee and contractor training on job hazards; and a housekeeping program that was deficient because it did not prevent grain dust accumulations.

Topeka-based Kansas Grain Inspection Services Inc., a contractor employed by Bartlett Grain, also is being cited for one willful violation involving a lack of fall protection for employees working on the top of rail cars; one serious violation, the lack of a hazard communication program; and one other-than-serious violation, not providing basic advisory information about respirators to employees. These violations carry total proposed penalties of $67,500.

Over the past 35 years, there have been more than 500 explosions in grain handling facilities across the United States that have killed more than 180 people and injured more than 675. Grain dust is the main source of fuel for explosions in grain handling. This dust is highly combustible and can burn or explode if enough becomes airborne or accumulates on a surface and finds an ignition source (such as a hot bearing, overheated motor or misaligned conveyor belt, as well as heat or sparks from welding, cutting and brazing operations). OSHA standards require that both grain dust and ignition sources be controlled in grain elevators to prevent potentially deadly explosions. For more information on grain handling, visit www.osha.gov/SLTC/grainhandling/index.html.

The citations to Bartlett Grain Co. L.P. and Kansas Grain Inspection Services Inc. can be viewed at www.osha.gov/ooc/citations/Bartlett_issued_04122012.pdf*.