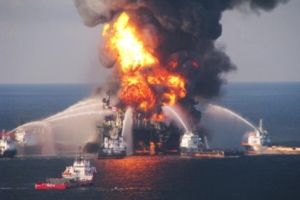 The U.S. Chemical Safety Board (CSB) says its investigation into the April 20, 2010 Macondo well blowout, explosion and fire in the Gulf of Mexico is progressing and will be completed in early 2013. The tragedy claimed took eleven lives and caused the worst environmental disaster in U.S. history,

Investigation findings to date indicate a need for companies and regulators to institute more rigorous accident prevention programs similar to those in use overseas. The CSB announcement was made approaching the second anniversary of the

Process safety regulations and standards utilized by oil companies in refineries and process plants in the continental U.S. have a stronger major accident prevention focus, CSB investigators have determined. Unlike the U.S. offshore regulatory system, the “onshore” process safety requirements are more rigorous and apply both to operators and key contractors.

To date, the CSB has conducted numerous interviews, examined tens of thousands of documents from over 15 companies and parties, gathered data from two phases of blowout preventer (BOP) testing, and conducted a public hearing on international regulatory approaches. Recommendations targeting specific reforms are contemplated for release as early as August of this year.

CSB Chairman Rafael Moure-Eraso said, “Our final report on the tragic accident that occurred two years ago, will, I believe, represent an opportunity to make fundamental safety improvements to offshore oil and gas exploration to prevent future catastrophic accidents.”

Although previous investigations of the blowout have produced information and recommendations, Moure-Eraso said important opportunities for changes that will prevent future accidents have not been fully addressed.

The first of several public meetings will be held in July 2012 in Houston. It will focus on the use of leading and lagging indicators by companies and regulators to improve safety performance.

The CSB anticipates releasing preliminary findings and safety recommendations at the meeting, and to hear experts testify on the need for the offshore drilling industry to utilize safety performance indicators like hydrocarbon leaks and maintenance of safety critical equipment to drive safety improvements and to prevent major accidents.

Dr. Moure-Eraso said the CSB’s investigation is taking a broad look at causal issues of the Macondo blowout and the subsequent massive release of flammable hydrocarbons which resulted in an explosion. “These issues include the manner in which the industry and the regulating agencies learn or did not learn from previous incidents. They also include a lack of human factors guidance, and organizational issues that impaired effective engineering decisions,” he said.

The issue of human factors in offshore drilling and well completion is particularly important as offshore well control programs currently rely to a large extent on manual control, procedures and human intervention to control hazards, said CSB Investigator Cheryl MacKenzie. She observed “There are no human factors standards or regulations in U.S. offshore drilling that focus on major accident prevention. As an example, we are investigating whether fatigue was a factor in this accident. Transocean’s rig workers, originally working 14-day shifts, had been required to go to 21-day shifts on board. CSB is examining whether this decision was assessed for its impact on safe operations.”

The CSB investigation team participated in the examination of the blowout preventer (BOP) in Louisiana last year. As has been reported, the BOP – a massive device designed to shear off the well pipe and stop the flow of volatile hydrocarbons -- failed. The CSB is currently evaluating BOP deficiencies as reflecting larger needed improvements in offshore risk management. These include lack of safety barrier reliability/ requirements, inadequate hazard analysis requirements for evaluating BOP equipment design, and insufficient management of change requirements for controlling hazards.

The CSB is conducting additional computer modeling of the BOP and assessing the capability of the BOP to close and which functions specifically led to its failure. The agency is also exploring new issues and “near miss” deficiencies that did or could have compromised the ability of the BOP to function properly, including the failure of the annular preventer to seal the well, the impact of drill pipe size, and the performance of the BOP hydraulic accumulators.
Finally, the CSB is carefully examining the physical causes of the drill pipe buckling that other investigations previously concluded may have prevented the BOP's blind shear rams from functioning correctly. The CSB is evaluating different mechanisms that could have led to the drill pipe buckling.

Moure-Eraso noted that the CSB investigation is also examining the implementation of effective corporate governance and sustainability standards to address safety and environmental risk, organizational issues that impaired effective engineering decisions, and the consideration of past safety performance in lease allocation decisions and contractor selection.

The CSB investigation into the accident has been delayed on occasion as the Board sought to work out mutually acceptable access and investigation agreements with other investigative groups that had different missions. The Department of Justice has filed an action against Transocean in federal court and has requested that the Court order Transocean to comply with the CSB subpoenas. Following a hearing last week, the CSB anticipates a decision from the Court in the near future.