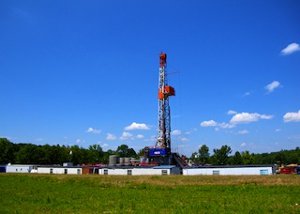 A study on the nation’s groundwater supply released by the journal Nature is giving anti-fracking opponents some fresh ammunition.

The study, which reveals that groundwater demand is exceeding supply, shows “the dangerous connection” between drought and fracking, according to Wenonah Hauter, Executive Director of Food & Water Watch.

“Drilling and fracking is not only a threat to water quality — it also uses massive amounts of water, removing much of the water used from the water cycle altogether." Hauter said the diverted water is needed to grow food.

In addition to concerns about water, a number of small earthquakes or tremors in Ohio and Lancashire, England have been attributed to fracking.

Hydraulic fracturing – known as "fracking" -- is a controversial process that involves injecting water, sand and chemicals into shale rock at high pressure, which allows natural gas to flow out to the head of the well. The process is carried out vertically or, more commonly, by drilling horizontally to the rock layer.

According to the website www.energyfromshale.org, studies estimate that up to 80 percent of natural gas wells drilled in the next decade will require hydraulic fracturing. The site says studies by the Ground Water Protection Council (GWPC), an association of state regulators, show that existing state regulations are adequate to protect water resources.

Hauter disagrees. “Unbelievably, even during horrendous drought conditions, oil and gas companies are able to continue using our freshwater resources while communities pay for pricy technologies like water reclamation plants, as we see in Big Spring, Texas,” she said. “And in Colorado, farmers are competing with the oil and gas industry, who are driving up prices at water auctions.

Hauter said the risk to water and agricultural areas has caused both France and Bulgaria to ban the practice.

Fracking opponents plan to publicize the issue and demand band by lawmakers on September 22, which they’ve designated as a “global day of action.”