The Climate Vulnerability Monitor warns that 100 million lives could be lost by 2030 if climate change and carbon-intensive energy practices are not addressed. 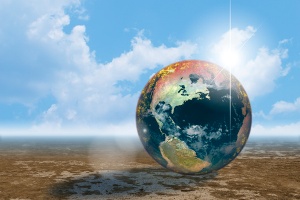 The report found that climate change is already responsible for 400,000 deaths per year, and the global carbon-intensive economy accounts for another 4.5 million annually. In 2010, economic losses from the carbon economy and climate change totaled more than $1.2 trillion, or almost two percent of global gross domestic product (GDP).

And that's what's happening already. By 2030, the report warns, "A combined climate-carbon crisis is estimated to claim 100 million lives between now and the end of the next decade." Furthermore, "Global GDP in 2030 is estimated to be well over 3% lower than it would have been in the absence of climate change and harmful carbon-intensive energy practices."

As is well understood by now, things are going to continue to get worse before they begin to improve, even if the global community were to fully embrace a low-carbon economy today. "The world is already committed to a substantial increase in global temperatures," the report warns, due to a number of factors; not the least of which is the lack of meaningful action by many national governments.

Nevertheless, "The losses incurred already exceed by a significant margin any costs of reducing emissions in line with a low-carbon transition," the report points out, and there is time yet to avoid the worst impacts of climate change. But national policymakers will have to commit firmly to the establishment of a low-carbon economy, and international efforts must be coordinated to mitigate the impacts on the world's poorest.

The report also provides recommendations for investors, advising them to perform comprehensive risk analyses that allow for the emergence of a low-carbon economy. For example, "only a very narrow window of legislative action in favor of a firm response to climate change would strand half or more of the world's existing stockpiles of carbon-based fuels as unmarketable." Therefore, if companies in carbon-based energy sectors cannot demonstrate to investors a robust plan for diversification into low-carbon alternatives, "corporate leadership are carrying investor resources along a risky political gamble."

Many more recommendations aimed at all key stakeholders are included in this important report. The 2015 deadline for meeting the Millenium Development Goals (MDGs), which were developed before the impacts of climate change were fully understood, is in serious jeopardy, and "the MDGs may not now be fully attained unless additional resources are devoted to the cause, targeting in particular progress specifically jeopardized by climate change impacts."