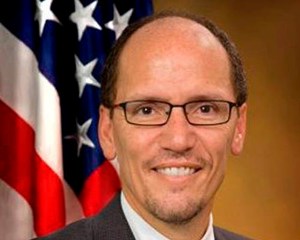 While there’s been no official announcement yet by President Obama, a number of news sources are naming Thomas E. Perez as the likely nominee to be the next secretary of labor.

Perez, 51, is assistant U.S. attorney general for civil rights. After graduating from Harvard Law School, he clerked for a federal judge in Colorado, then worked as a prosecutor in the Civil Rights Division. His experience in public office includes being a city council member in Montgomery County, Maryland, and as the head of Maryland’s state labor department.

If nominated and confirmed, the first-generation Dominican would replace Hilda L. Solis, who resigned in January – a nod to Latino groups demanding representation in Obama’s second-term Cabinet.

Perez’s division oversaw voting rights cases against South Carolina and Texas that required voters to show a photo ID – developments that drew the ire of conservatives and sparked lawsuits to overturn the federal action that resulted in a split decision.

Progressives applaud Perez’ efforts to codify protections for domestic workers and note that while serving in the Justice Department, he investigated claims that employers were using Alabama’s new immigration law to avoid paying immigrant workers.