NTSB chair to head up NSC 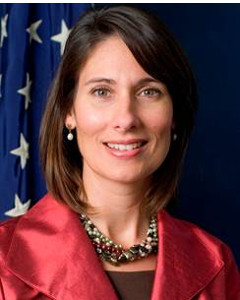 The National Safety Council (NSC) announced today the appointment of Deborah A.P. Hersman as the  president and CEO of the 100-year-old organization chartered by Congress to prevent unintentional injury and death. Ms. Hersman, who is currently the chairman of the National Transportation Safety Board (NTSB), will be joining NSC at its headquarters in Itasca, IL, in suburban Chicago.

“Debbie is a recognized leader in safety, with a frontline understanding of the value of protecting human life through thoughtful attention and management of risk,” said Jeff Woodbury, chairman of NSC board of directors. “Her proven leadership and expertise made her the ideal candidate to take the Council successfully into its second century.”

Ms. Hersman is acknowledged as a visionary and passionate safety leader who advocates for safety across all modes of transportation. At NTSB, the preeminent accident investigation organization, she has been on-scene for more than 20 major transportation accidents, chaired scores of NTSB hearings, forums and events, and regularly testifies before Congress.

Ms. Hersman was first appointed as a NTSB board member by President Bush in 2004 and was reappointed to two additional five-year terms by President Obama in 2009 and 2013. She was appointed chairman by President Obama in 2009, 2011 and 2013, with unanimous Senate confirmation votes. Previously, Ms. Hersman was a senior advisor to the U.S. Senate Committee on Commerce, Science and Transportation from 1999-2004 and served as staff director and senior legislative aide to former U.S. Rep. Bob Wise (D. – W.Va.) from 1992-1999.

“I am thrilled to have the opportunity to lead an organization dedicated to saving lives and preventing injuries,” said Deborah Hersman. “The National Safety Council vision of ‘making our world safer’ has the potential to improve every workplace, every community and the way we travel every day.”

About the National Safety Council

Founded in 1913 and chartered by Congress, the National Safety Council, nsc.org, is a nonprofit organization whose mission is to save lives by preventing injuries and deaths at work, in homes and communities, and on the roads through leadership, research, education and advocacy. NSC advances this mission by partnering with businesses, government agencies, elected officials and the public in areas that can make the most impact – distracted driving, teen driving, workplace safety, prescription drug overdoses and Safe Communities.