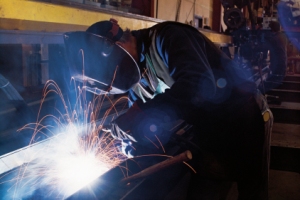 Welding fumes are composed of metals and most fumes contain a small percentage of manganese. There is a concern by workers, employers, and health professionals about potential neurological effects associated with exposure to manganese in welding fumes. NIOSH has been conducting research and reviewing the published scientific literature to assess this problem.

Manganese is an essential nutrient. A healthy person with normal liver and kidney function can excrete excess dietary manganese. Inhaled manganese is of greater concern because it bypasses the body’s normal defense mechanisms. This can lead to manganese accumulation and adverse health effects including damage to the lungs, liver, kidney and central nervous system. Male workers exposed to manganese also have a higher risk of fertility problems. Prolonged exposure to high manganese concentrations (>1 mg/m3) in air may lead to a Parkinsonian syndrome known as “manganism.” Chronic exposure to the manganese-containing pesticide, maneb, is also reported to cause Parkinson-like symptoms. Parkinson-like symptoms may include tremors, slowness of movement, muscle rigidity, and poor balance.

Recent studies indicate neurological and neurobehavioral deficits may occur when workers are exposed to low levels of manganese (<0.2 mg/m3) in welding fumes. These effects include changes in mood and short-term memory, altered reaction time, and reduced hand-eye coordination. Affected workers frequently show abnormal accumulations of manganese in a region of the brain known as the globus pallidus. The globus pallidus plays an important role in movement regulation.

The National Institute for Occupational Safety and Health (NIOSH) is currently reviewing its Recommended Exposure Limit (REL) for manganese as a result of these studies. Evaluation of the available scientific literature of manganese exposure during welding is complicated by several factors. These factors include inconsistent conclusions, limited data on the biological processes that might result in given health outcomes, and the complex mixtures of welding fumes. A comprehensive review of the available scientific literature is in development and will be made available for public review. Pending the issuance of a final document, existing NIOSH resources listed below are offered to provide assistance in assessing and controlling work-related exposures to welding fumes.

Exposure to manganese dust occurs primarily in mining, ore-crushing, and metallurgical operations for iron, steel, ferrous and nonferrous alloys. Manufacturing of dry-cell batteries, anti-knock gasoline additives, pesticides (e.g. maneb), pigments, dyes, inks and incendiary devices can also lead to occupational manganese exposure. Manganese fumes are produced during metallurgical operations and several types of welding operations. The exposure can vary considerably depending on the amount of manganese in the welding wire, rods, flux and base metal. Confined spacewelding can significantly increase exposure to manganese fumes. For information about assessment of occupational exposure to manganese visit the NIOSH manganese topic page.

Numerous studies indicate that welders may be at increased risk of neurological and neurobehavioral health effects when exposed to metals such as lead, iron and manganese. Carbon monoxide, heat and stress can also contribute to neurological impairments in welders. Some studies indicate that welders exposed to low levels of manganese (<0.2 mg/m3 ) perform more poorly on tests of brain function and motor skills. These effects include changes in mood and short-term memory, altered reaction time, and reduced hand-eye coordination. It is not known if these findings have clinical significance.