Can the safety and health profession survive the demise of the middle class? 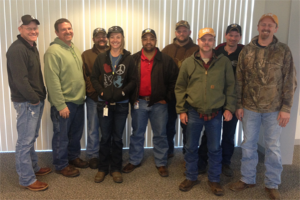 I’m looking at a photo sent by a reader that shows nine workers standing in a line – one woman and eight guys it appears to me – who form the team that starts safety meetings. All are wearing jeans. All are smiling. You can tell they’re good guys (and women). They’re workers, man, plain and simple. Eight of ‘em wear ball caps.

These are the folks safety and health managers typically watch out for.

My question is, where will these folks be five, ten years from now? All appear to be in their 30s or 40s. Will they still have jobs? Will they have jobs that require the oversight and management of safety and health professionals?

I’m just asking… Chime in with your opinion. Talk to me at johnsond@bnpmedia.com

You can read the news all over the Internet:

“…the middle class, so long a powerhouse of U.S. prosperity, is being crushed as never before…”

“ the single biggest issue facing the country is the destruction of the American middle class.”

Leftist fear-mongering to get Hillary elected in 2016?

The Wall Street Journal, no leftist rag, recently reported that Procter & Gamble is cutting back on marketing to the fading middle classes, instead selling more to either high-income or low-income customers and abandoning the middle.

According to The Journal, Citibank has coined this “the Consumer Hourglass Theory” – because it depicts a society that bulges at the top and bottom and is squeezed in the middle.

If you look at what’s happening in the auto industry, yes, there will be jobs for the middle class, but workers will be scrambling to make a decent living. At Chrysler’s Jefferson North plant in Detroit, the newest workers earn about $14 an hour; longtime employees earn double that. The industry calls it the “two-tier wage system.”

“Everybody is appreciative of a job and glad to be working,” Derrick Chatman, who makes $14.65 an hour putting tires on Jeeps after being laid off at Home Depot, working odd construction jobs and collecting unemployment, told The New York Times.

“This is not going away,” Kristin Dziczek, a labor analyst at the Center for Automotive Research in Ann Arbor, Mich., told The Times. “It has allowed the Big Three to reduce labor costs without cutting the pay of incumbent workers. Is it good for the health and competitiveness of the companies? Yes. And is that good for job security? Yes.”

Instead of the guaranteed $3,100-a-month pension a full-paid worker receives after age 60, the new hires have to build their own “personal retirement plan” based on contributions from the company of less than $2,000 a year, according to The Times.

What does it mean to be middle class?

The Pew Charitable Trusts, a research group, says the U.S .middle class is those earning roughly between $33,000 and $64,000 a year. A qualifier: Americans love to identify themselves as middle class, even if their incomes are much higher or lower than the national average. It's more about a mentality than an actual income range.

U.K. newspaper The Guardian columnist Gary Younge questions whether the middle class American dream is deadafter the recession. In a mere three years from 2007 to 2010, the median family in America lost a generation of wealth. University tuition costs have increased 27% at state schools and 13% above inflation at private institutions in the last five years, according to Younge.

He asks: With many who would traditionally describe themselves as "middle class" caught in poverty and economic instability, who truly fits into this category?

Not your average safety and health professional. According to the Board of Certified Safety Professionals, a survey of 2,236 BCSP members in 2012 revealed the average salary (no-certification) to be $85,566.23

That’s not bad bread at all. Especially when you add in a second income as in most married families today.

But the demise of the once-vaunted U.S. middle class, with many blue-collar jobs long gone overseas, could kill off interest in becoming a safety and health pro in future decades, if not even that far off.

You might recall that in October 2011 NIOSH announced that America’s colleges and universities are expected to graduate 13,000 OS&H professionals in the next five years, compared with employers’ projections of 25,000 hires over the same period. There just doesn’t appear to be the interest in safety and health jobs. Safety isn’t sexy, isn’t techie, isn’t talked about much, gets very little publicity and promotion.

Key Findings of the NIOSH Survey

Is history repeating itself?

That’s the question posed by Christopher A. Janicak, Ph.D., CSP, ARM. He says, “Like many other professions in the U.S., SH&E could soon be facing a shortage of qualified individuals entering the workplace. As the average age of the population increases, many individuals currently working as safety managers, educators, industrial hygienists and safety engineers will soon be retiring, creating this potential shortage of well-qualified and degreed individuals to fill the jobs vacated by retirements. This is further compounded by a lack of SH&E professionals with doctoral degrees in safety necessary to prepare safety students.

According to research by Pew, “The Great Recession” officially ended years ago, but most middle-class Americans are still feeling pinched. About six-in-ten (62%) say they had to reduce household spending in the past year because money was tight, compared with 53% who said so in 2008.

The downbeat short-term perspective is not surprising in light of the heavy economic blows delivered by the Great Recession of 2007-2009 and the sluggish recovery since. About four-in-ten (42%) middle-class adults say their household’s financial situation is worse now than it was before the recession, while 32% say they are in better shape; an additional 23% volunteered that their finances are unchanged. Of those who say they’re in worse shape, about half (51%) say it will take at least five years to recover, including 8% who predict they will never recover.

About that safety team I referred to in the beginning of this post, I glad these folks are still smiling…