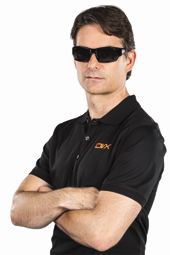 Jeff Gordon serves as the face of DVX™ Sun + Safety Eyewear - and his first exciting victory of the 2014 Sprint Cup season May 10 brought him an important step closer to his ultimate goal as a NASCAR champion - adding a fifth Sprint Cup championship to his career resume. Gordon took the lead at Kansas Speedway with eight laps to go when another driver had to pit for fuel, then held off a furious challenge from Kevin Harvick® to take the checkered flag by the narrowest of margins - "by inches," as Gordon himself reported to ESPN.

Gordon has been the model of consistency this season, entering this race with four top-five finishes in 10 starts (he had eight all of last season).  Gordon came in as the 2014 Sprint Cup points leader, yet he had yet to notch that critical first victory. Gordon made no secret that this was weighing heavily on his team. Fortunately, Kansas Speedway has long been one of Gordon's favorite tracks, and this nighttime race couldn’t have come at a better time. This latest win was his third victory in Kansas, taking the first two Cup races here in 2001 and 2002.

This victory was important to Gordon and his team for several reasons. First, it opened a crucial door for Gordon to pursue what could be his fifth Sprint Cup Championship. Second, it earned Gordon his 89th career victory, putting him one step closer to an important milestone. And most importantly, Gordon acknowledged that this win under the lights gave his team the drive and confidence to go for win #90 and beyond with the remainder of the season.

Jeff Gordon's winning attitude and commitment to excellence make him a perfect ambassador for DVX Sun + Safety Eyewear.  DVX Sun + Safety shades provide men and women with crystal clear vision under the toughest conditions on the planet. In addition, these stylish, high-performance shades provide wearers with advanced vision protection whether at work, driving the open road, riding motorcycles, playing in the great outdoors, or just hanging out with friends. All DVX Eyewear models carry the stringent ANSI-Z87 High Velocity and High Mass Impact rating, for true OSHA-grade protection against hazards found on the job or off.

DVX Sun + Safety glasses are constructed from high-tech DuPont™ Hytrel® thermoplastic polyester elastomer, a lightweight material that combines the flexibility of rubbers, the strength of plastics and the formulation of thermoplastics. All DVX styles are designed for good looks, wearing comfort and performance, with features including rubberized nose pads and temple tips for a secure, yet comfortable fit, even when the action gets fast and furious.

Even with all this style, protection and versatility, DVX glasses are affordably priced ($48 for non-polarized and $78 for glare-cutting polarized models). Almost all DVX Sun + Safety eyewear models are Rx-ready, making them an ideal and versatile option for anyone who needs corrective lenses for work or recreation. Selected models are also offered in DVX's unique Rx-Rim configurations, allowing them to accommodate a wide range of prescription lens options.

DVX eyewear is available in more than 2,700 Walmart Vision Centers nationwide and offers a 12-month warranty against manufacturer's defects on all frames and lenses.  For more information about DVX Sun + Safety eyewear, visit dvxeyewear.com.