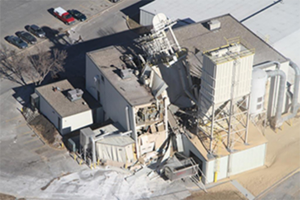 An Omaha building collapse that killed two workers and injured nine others was caused by overloading nine storage bins on the building's roof level, an OSHA investigation has found.

As a result of the tragedy, OSHA has cited the company with one willful, one repeat and 11 additional safety violations for failing to protect workers from hazards associated with structural collapse.

Four workers were trapped in the rubble of the building after the collapse and were rescued by the Omaha Fire Department's ladder truck rescue team. They and five other workers were transported to the hospital with injuries.

“International Nutrition's decision to overload these bins directly led to the deaths of these two workers and the injuries sustained by nine other employees," said Assistant Secretary of Labor for Occupational Safety and Health Dr. David Michaels. "Families lost loved ones because International Nutrition did not follow the basic safety procedures that would have prevented this senseless loss of life."

The company manufactures a feed supplement using multiple dry ingredients, rice hulls, solulac and limestone - the ingredients that were stored in the nine bins on the roof of the structure.

OSHA has proposed penalties of $120,560 and placed the company in its Severe Violator Enforcement Program after its investigation into the collapse.

OSHA conducted its investigation in cooperation with several other governmental agencies and specialized companies including the City of Omaha and the Omaha Fire and Police Departments, as well as Urban Search and Rescue based in Lincoln. Engineering Specialists provided professional engineering assistance.

"Each of these agencies and companies provided professional knowledge that was critical to protecting workers during the building demolition and in determining the cause of the structural collapse," said Bonita Winingham, OSHA area director in Omaha. "Omaha Fire and Rescue prevented further injury and Urban Search and Rescue performed some of the most hazardous work by entering the building to recover the two victims. OSHA is appreciative of the cooperation demonstrated by all the professionals involved in the investigation and their commitment to preventing future tragedies."