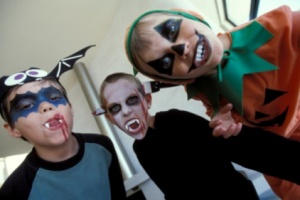 The Ecology Center's healthystuff.org tested 106 Halloween-related products, including costumes, accessories, decorations and party favors and released a report documenting the toxic chemicals found in them.

"We really want to give folks that information so they can make an educated decision on whether or not they want to bring these products into their home," said Rebecca Meuninck, one of the authors of the Halloween products study.

"All environmental exposures matter," Erin Ihde, research and project manager at The Deirdre Imus Environmental Health Center at Hackensack University Medical Center, wrote in an email. "They don't happen in a silo; it's important to keep in mind that they occur in combination with other exposures."

Children are especially vulnerable, according to Ihde.

"Pound for pound of body weight, they take in more air, water and food than adults," she wrote. "They also have frequent hand-to-mouth contact, which is of concern with toxins in Halloween costumes."

Ten percent of the products tested contained levels of bromine consistent with brominated flame retardants, including two Disney-themed trick-or-treat bags. Flame retardant chemicals are particularly concerning because they can come off the product and have been found in dust particles, especially in carpeting and on the floor, according to Meuninck. The disposable nature of these items also makes them dangerous, because they chemicals can end up in the food chain or water supply after they are thrown out, she said.