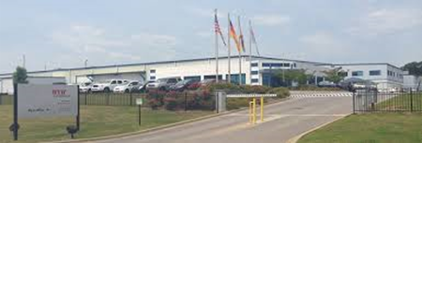 A worker at WKW Erbsloeh North America Inc.'s Alabama facility was helping with tank maintenance when he slipped, fell backwards, and became submerged in a tank filled with highly corrosive phosphoric and sulfuric acid. The man was saved, but not before suffering severe burns to his face and internal organs.

At right: The WKW facility in Pell City, Alabama.

OSHA investigators found that the Pell City, Alabama auto parts manufacturer – which supplies parts to Mercedes, Volkswagen and General Motors – placed its employees in serious peril. The company has been inspected by OSHA eight times since 2009 and has received citations related to unguarded machinery, confined spaces, personal protective equipment and respiratory protection.

The latest round of citations will cost WKW Erbsloeh $177,500 in penalties.

WKW was issued a willful citation for exposing workers to falls from walkways without railings. OSHA requires walkways, platforms or runways above or next to dangerous equipment, including chemical tanks, to have railing and toeboards installed.

"A hazard that was known"

"Allowing a worker to be injured by a hazard that was known by all is terrible. This worker was doing the right thing, but management was not," said Ramona Morris, director of OSHA's Birmingham Area Office.

Two repeated citations were issued for failing to ensure that machinery would not start up while workers performed machine maintenance and service and for not training workers on how to prevent accidental startup. WKW was cited previously for similar violations in March 2010 at the Pell City facility.

Bureau of Labor Statistics data from the preliminary Census of Fatal Occupational Injuries shows fatal work injuries in Alabama accounted for 66 of the 4,405 fatal work injuries* reported nationally in 2013. Additional details are available at http://www.bls.gov.