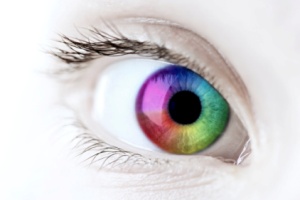 It turns out Jim wasn’t the only one at work with vision problems. To his surprise, Jim discovered almost all of his co-workers who worked the line with him at the label production plant had experienced some sort of vision problems over the last year—including changes in vision, blurred vision or irritation.

Once workers and supervisors compared notes, the company requested a Health Hazard Evaluation by the National Institute for Occupational Safety and Health (NIOSH). After taking workers’ job and medical histories, performing eye examinations, taking air samples, reviewing the literature on visual effects associated with chemicals commonly found in printing and other industrial processes, and analyzing samples of the ink used at the plant, the investigators arrived at a plausible association between the workers’ jobs and their symptoms.

Certain amines, chemical compounds derived from ammonia, have been shown to cause visual symptoms, such as blurred or hazy vision in both an industrial and laboratory settings. Amines are chemical compounds typically used as solvents, preservatives, drugs, or herbicides—or in the case of the label production plant, as part of the ink and ink additive.

Click here to read the rest of the post, which is the first installment in the NIOSH Workplace Medical Mystery Series.