What are you doing right now?

Chances are you’ve got a number of things on your mind. You are reading, check, you may be drinking a coffee, waiting on an email or half-working on the report that’s due by the end of the week.

Your phone might have just pinged, and the clouds outside your window are really starting to look threatening. What’s the forecast for tonight? Is it to rain? You need to cut the grass because it’s not been cut in ages, since the Rangers played the Mariners in fact. Oh, remember you need to pick up the tickets for the game this weekend! That reminds you, you also need to take your partner to pick up their car from the workshop after its service because otherwise they’ll have no way of meeting you at the school’s parents evening on Thursday. Wait, is parents evening Thursday or Wednesday? Better text your partner to find out. Ah, the ping was from the delivery company – no one was in to accept your order and now you have to go collect it from the depot. Depot… repot… report. Ah yes, the report that’s due on Friday…

Truth is, we are inundated with distractions, and the ability to focus on one thing at a time is a skill which requires practice. We switch about, and if the word ‘multi-tasking’ springs to mind, think again – no human can truly multitask. And when we are interrupted during a task it takes an average of 23 minutes and 15 seconds to regain focus.

Arguably today we are the most distracted people ever, partly down to the little demanding devices we carry around in our pockets, rarely out with reaching distance and that immediately connect us to a world of people, knowledge, or… distractions. On NY Times, Tony Schwartz writes in an article called Addicted to Distraction: “According to one recent survey, the average white-collar worker spends about six hours a day on email. That doesn’t count time online spent shopping, searching or keeping up with social media.”

Cell phones and the Internet are particular types of distraction, but what’s more profound is the grand scale of distractions. Family life, the appraisal coming up, bills, moving house, the political argument you got into with complete strangers on Facebook, planning a holiday, the list goes on. It piles up. Schwartz puts it well by saying “It’s as if our brain has become a full cup of water and anything more poured into it starts to spill out.”

Now, things happen – life would be boring if they didn’t – and we often can’t control them. Uncontrolled thoughts related to past or future are also part of being human (a darned annoying part, at that). What we need to get better at is managing our reactions to unwelcome experiences. The practice of dealing with this effectively is called Mindfulness.

By the way, as I type this, the phone of my MD sitting next to me pings and his attention is immediately diverted from what he was originally working on. Must. Respond. To. The Beep.

A mental state achieved by focusing one's awareness on the present moment, while calmly acknowledging and accepting one's feelings, thoughts, and bodily sensations, used as a therapeutic technique.

Okay, that may be enough ‘spiritual exploration and enlightenment’ for one day; however, mindfulness is gaining pace in the ‘down to brass tacks’ of the business world, with many companies incorporating mindfulness practice into their culture such as Google, Apple, General Mills and the U.S. Army. Mindfulness has been found to result in better employee well-being, lower levels of frustration, lower absenteeism and burnout as well as improved overall work environment. It came to popularity in the West with Jon Kabat-Zinn in 1979 and has been gaining traction ever since.

Let’s take the above companies as an example. Successful companies, successful CEOs. Well, what makes someone successful? Self-control has been proven to be more important in success than intelligence or social class – find out more in this TEDx talk. According to Christopher Lyddy, an organizational behavior doctoral candidate heading up research into the topic at Case Western Reserve University, “When you are mindful, you can have a greater consciousness in the present … That's vital for any executive or manager, who, at any given moment, may be barraged with various problems that call for decisions under stress.”

Before I lose you, let me explain why this is so relevant to you and to EHS.

EHS in the workplace is unequivocally affected by workers or management becoming distracted. 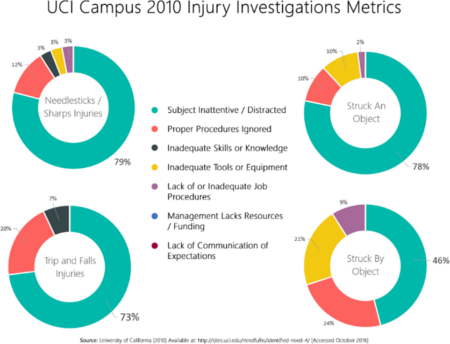 The UCI conducted an injury investigation study in 2010 that concluded that 73% of trips and falls, the most common incident type, were caused by the subject being inattentive or distracted (see Figure 1 at right). 73%!

It’s a similar story for Struck An Object Injuries and Needlesticks/Sharps Injuries. The study stopped short of detailing what these distractions were, but the fact that it contributes to almost three quarters of workplace injuries says a whole lot. To be precise, it says, ‘you humans have really got to get better at focusing on what you are doing in the moment and withstand the temptation to get distracted elsewhere, because it can end badly if you don’t.’

On the other hand, an EHS Director could be so distracted by the macro, that they lose track of the micro. Or vice versa. Although this may not directly lead to a slip, trip or a fall, it affects performance, morale and the ability to lead.

Focusing more on immediate distractions, a 2013 study by the Michigan State University found that interruptions of just 2.8 seconds whilst carrying out a task double the likelihood of error. Bad news for any worker, really, but for those working in high-risk environments such as – as suggested by Lead Researcher Erik Altmann – airplane mechanics or emergency room doctors, a 2.8 second distraction could be seriously consequential: “What this means is that our health and safety is, on some level, contingent on whether the people looking after it have been interrupted,” Altmann notes. 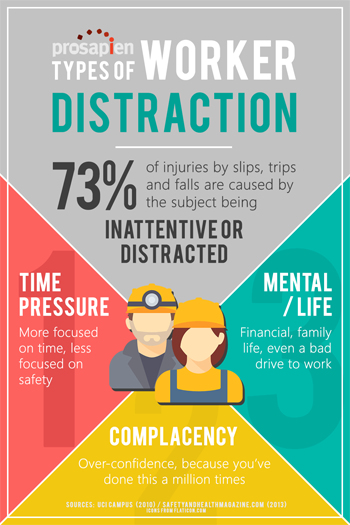 According to a comprehensive Microsoft Corporation study from 2015, the human attention span is now just 8 seconds. It’s so low that infographics, like my one here on worker distractions, are recognized as the best way to get a message across to the distracted, busy (and, arguably, increasingly lazy) human.

Ed note: This 8 second human attention span statistic is pretty worrying given other studies by Statistic Brain Research Institute which state that gold fish actually have an attention span of 9 seconds; lowered human attention spans and increased distractions is a dangerous trend if said attention is averted from safety procedures. Not good for anyone (except perhaps for the self-esteem of goldfish!) The irony is not lost on the editor that he has been distracted by thoughts of goldfish when reviewing an EHS mindfulness article!

The error rate after interruption rises due to workers having to shift their attention from one task to another. Note, again, no humans can truly multitask. During a process that takes considerable thought, such as driving, operating machinery, flying a plane or even carrying out a routine medical task on a patient, momentary distractions can be extremely damaging.

How do we overcome these demands on our minds? 2.8 seconds could be anything from a cell phone vibration to someone asking you a question as they walk past. How can you help that the guy in front of you on the drive to work was an egoistic moron that deliberately didn’t indicate left just to annoy you? Well, we know that mindfulness helps us focus: studies suggest that mindfulness helps us tune out distractions and improves our memory and attention skills. But it is the management of your reactions that you are fully in control of and that can shape the outcome of a scenario.

The goal of EHS is to try to control potentially dangerous situations in a way to reduce the risk of harm to humans and the environment – as of yet, we aren’t at that 100% mark and as long as humans remain the primary labor force we likely never will be. We also aren’t going for target zero, where there are no incidents or injuries whatsoever; it’s more realistic to target zero unsafe behaviors. In achieving this, alongside implementing processes such as Safe Systems of Work and Hazard Observations, we tap into what each human can control: our reactions. Be the lotus who emerged from the mud.

Don’t confuse reactions with emotions. Mindfulness gives us a space between emotions and our reactions, allowing us time, however brief, to reflect and respond appropriately.

High-risk environments can be stressful; inappropriate or knee-jerk human reactions often associated with stress can cause injury or influence dangerous situations. The ongoing reaction is as equally impactful; a negative occurrence at work can – as per human nature – replay over and over in our heads, ultimately distracting us from future activities. And so the process continues. The same goes for home life, as my colleague who is often up at 3AM dealing with unwell children rightfully points out. Stress is part of the package but it is also one of many things mindfulness can help you manage.

EHS Directors, like all top level management today, are inundated with responsibilities and distractions as we’ve discussed. Workers alike have so many things on their minds that can interfere with job performance and directly contribute to accidents. Incorporating mindfulness into your culture can not only improve productivity ‘shop-floor to top-floor’, but reduce stress levels and promote quality of life too.

Take it from one of the most successful companies in the world. General Mills, parent company to many-a-well-known brand such as Old El Paso, Cheerios (through partnership with Nestle) and Yoplait, has over 42,000 employees throughout the world, generating $16.9BN in sales for FY15/16. The conglomerate conducted their own research into mindfulness:

“[General Mills] has even begun research into its efficacy, and the early results are striking. After one of Marturano’s seven-week courses [in mindfulness], 83 per cent of participants said they were “taking time each day to optimize my personal productivity” – up from 23 per cent before the course. Eighty-two per cent said they now make time to eliminate tasks with limited productivity value – up from 32 per cent before the course. And among senior executives who took the course, 80 per cent reported a positive change in their ability to make better decisions, while 89 per cent said they became better listeners.”

We often talk about safety being a top-down process; mindfulness, too, should start at the top.

In the next section we’ll talk about how you can incorporate mindfulness into your life and into the days of your workers. For now, like a bit of homework, I’ll leave you with this: when was the last time you did absolutely, unequivocally, completely nothing?

Mental health: Mindfulness in the workplace

Be mindful, be focused, be safe – and less stressed