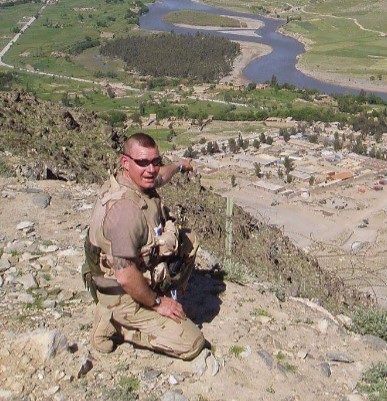 Bill Muir is a combat veteran - a paratrooper who served as a medic with the 173rd Airborne Brigade.

He’s also a longtime vegan who managed to eat a plant-based diet during his deployment in Afghanistan.

These days, “Sgt. Vegan” is still involved with the military – as a Registered Nurse working at the V.A. Medical Center in West Los Angeles – and with veganism – as the author of a book describing its benefits and advising people on how to embrace veganism in a non-vegan world.

Although a growing awareness of the link between diet and disease has caused a greater emphasis on plant-based eating in the U.S., veganism – following a diet that contains no animal products – is only practiced by an estimated two percent of two percent of the U.S. population, or 1.62 million people.1

Nonetheless, vegan dishes are increasingly appearing on restaurant menus (even White Castle has a vegan slider) and prepared vegan products have moved beyond health food stores and into the aisle of major supermarket chains. While some people might be reluctant to commit fully to a vegan diet, there is clearly an interest in eating more plant-based meals.

Muir, who earned a Certificate in Vegan Culinary Arts from Atlantic Union College following his honorable discharge from the military, wants to help people move from curious to committed.

His book, Vegan Strong: The Ultimate Field Manual for a Kick-Ass Plant-Fueled Life, is aimed at helping newcomers to the diet “navigate all the life changes that go with being vegan.”

Why should people consider becoming vegans?

Studies have linked a vegan diet to lower rates of chronic disease like heart disease and to higher levels of dietary  fiber, magnesium, folic acid, vitamin C, vitamin E and iron, although health experts note that Vitamin B12 supplementation is especially important for vegans.

The American Medical Association (AMA) House of Delegates last year issued a position paper in which it called on hospitals to serve more plant-based foods and fewer processed meat meals to its patients.2

A common concern about vegan diets is whether or not they include sufficient protein.

“Think you need more protein? Then eat more protein!” says Muir. “The vegan diet is loaded with great options for protein, whether you are going old school with lentils, beans, nuts, and tofu, new school with all of the faux meat products like Tofurky, Gardein, Beyond Meat or the Impossible Burger, or with supplements like Vega or Cliff Bars.”

Being a minority eater in the U.S. has its challenges, some of which Muir addresses in his book:

He also provides information on how to get fit and put on muscle as a vegan.

A vegan for 26 years, Muir originally gave up meat for Lent back in 1992. “I felt healthier after Lent was over so I stuck with it,” he says.

A realization of the cruelty of factory farming moved Muir from the vegetarian column to the vegan one.

“As a meat eater I had been oblivious to the suffering of animals. Even though I was no longer eating meat, as a vegetarian I was still supporting those industries by buying eggs and dairy. I had to decide just how much animal abuse I was OK with. I realized that the answer was none, and at that point I became vegan.”

Learning about what the effects of factory farming on the environment further strengthened his convictions. Muir points out that animal agriculture is one of the leading causes of global climate change and of pollution in water ways.

“In addition to this, being vegan uses fewer of our resources than being a meat eater, as growing vegetables uses less water than raising animals for food does. In 2018 you can be anything you want, but you can’t be an environmentalist and still eat meat. That just doesn’t make sense.”

A vegan in the Army

The camo imagery on the book’s cover begs the question: How hard was for Muir to eat a plant-based diet while he was in the military?

Muir – who was motivated to join the army by the terrorist attacks of 9/11 - admits that it was difficult at times, especially in boot camp, where he at a lot of peanut butter and jelly sandwiches, dry cereal and toast – and lost a lot of weight. “After boot camp being vegan became a lot easier. I was stationed in Italy, which is a great place to live and a super great place to be vegan. I deployed to Afghanistan for a year, and while that was tricky it was not impossible.”

Muir posted on a website for deployed military called anysolider.com and got an overwhelming response from people from all over the world, who sent him vegan food. He was also “semi-sponsored” by Tofurky – a producer of vegan prepared food.

Vegan Strong is available on Amazon at https://goo.gl/Xx6LLt