Through the combined efforts of subject matter experts, investigative journalism and, sometimes law enforcement, issues such as bad ethics, criminal acts, lessons-learned and worst-case scenarios have been consistently reported over the years. Many are reported after the incident with investigations completed while others have been fortunately reported proactively so the issue in question could be resolved before an injury, exposure or even death.

Some of these situations are more well-known than others such as the Bhopal disaster, the pesticide leak that exposed over 500,000 to methyl isocyanide (Banjeree, 2013) and NASA’s Challenger and Columbia spaceflight disasters; when viewed in conjunction with other disasters such as Chernobyl and Three-Mile Island, the basis for the proactive hazard identification, communication, leading indicators and continual improvement forming high reliability theory and operations was born (Boin & Schulman, 2008). With this, for high reliability operations to be realized and sustainable, mechanisms are needed for reporting hazards, persisting unsafe conditions or practices and situations requiring resolutions or even justice. This created the role of the need for whistleblowers, those with the ability and will to report these types of situations. 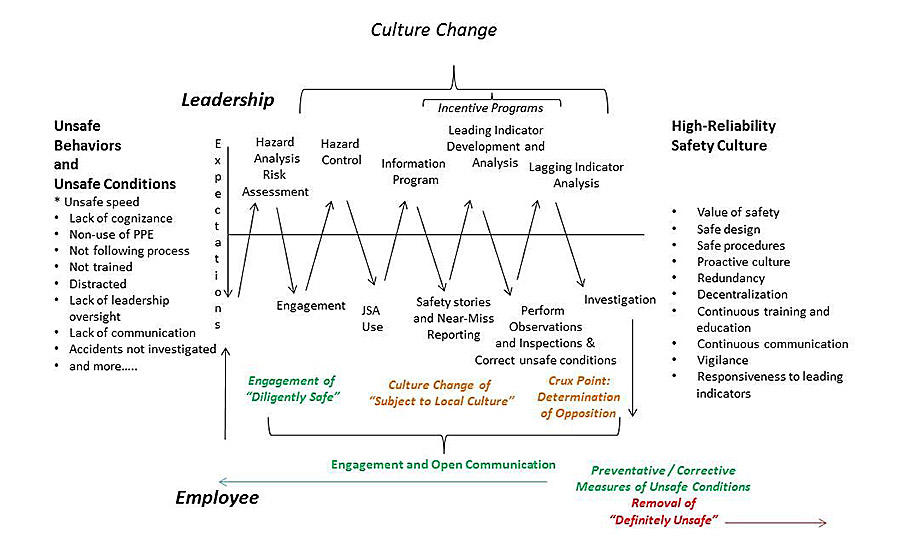 With applications in many capacities including consumer products, government employment and more, whistleblower protections certain extent to safety issues and are specifically addressed by OSHA (OSHA, n.d.). In this, OSHA condemns any reprisal, ‘blacklisting,’ firing or laying off, intimidation or other negative consequences for bringing forth a safety concern. Complaints must be filed within certain time frames following the alleged reprisal depending on the safety issue or regulation originating the issue and certain stipulation   apply to the protections. For example, for an employee to be found to have been wronged for his or her status as a whistleblower, a resulting investigation must show that the employee reported a protected concern, the employer knew about the concern and the report, the employee was reprised against and that the reprisal was correlated to the report (OSHA, n.d.).

For a whistleblower situation to exist, a safety concern must first exist to be reported. Like all leading and lagging indicators, these reports may involve unsafe working conditions such as facilities or environmental issues, equipment issues, training deficiencies or other concerns that can be often located during an inspection. Otherwise, they may involve unsafe work practices, real-time actions that may involve practices leading to potential injuries, exposures, contamination, or other negative consequences; these unsafe practices can often be identified during observations (Worden, 2015).

Unsafe working conditions can often be felt, heard, touched, or otherwise sensed. They can be found during inspections. At times, they can be mitigated by passive hazard controls such as barriers, specialized facilities (such as negative pressure isolation rooms or noise-controlled areas) and at times require active hazard controls requiring employee action such as Personal Protective Equipment use. In some cases, notably the NASA Challenger and Columbia tragedies, unsafe conditions with the spacecraft – faults with equipment and processes eventually labeled ‘normalization of deviance’ in that the safety bypasses had existed so long they became normalized in the operational culture – directly led to losses of life (Cook, 2016).

With COVID-19 being a major factor in 2020, there have been many situations of confusion regarding what unsafe conditions are. In some cases, employers have determined their hazard control to be keep all employees in different workspaces with complete social distancing and barriers, provide hand hygiene materials, provide face covers and provide proper ventilation and air filtration. However, because the organization did not offer N95 respirators, employees complained that they were being forced to work in unsafe conditions. In this case, however, the combination of controls the organization developed mitigated the need for N95 respirators that would be required if the employees were working within 6’ of potentially infectious persons for more than 15 minutes compiled over 24 hours. Had the organization directed its employees, such as nurses, to work within proximity to infectious persons without a proper respiratory protection program, this would be an unsafe condition (Worden, 2020).

Unfortunately, in some cases, unsafe work practices can affect others. Aside from examples such as those where supervisors encourage employees to bypass safety procedures to create more production (Worden, 2018), some duties, notably public servants such as law enforcement, require applications of procedures with active communication and emotional intelligence in potentially volatile situations. Should unsafe practices, miscommunication or other potentially harmful situations arise in an already volatile situation, loss of life, civil unrest or other outcomes could arise such as the outcomes from George Floyd’s killing in Minneapolis in 2020 (Hill, Tiefenthäler, Triebert, Jordan, Willis & Stein, 2020). Unfortunately, situations as such have occurred through time, as Hersh (2018) reports a direct confession of a racially motivated killing from a police officer during his earliest days as a reporter in the 1950s.

‘Whistleblowers’ who are not actually blowing whistles at all

Interestingly, a different variety of whistleblowers have gained notoriety in 2020 in that they may not be whistleblowers at all. While, over the years, conspiracy theories of many varieties have existed including the President Kennedy assassination conspiracy theory, supposed ‘Illuminati’ elites and more (Aaronovich, 2011), the ‘Q’Anon’ online community, a broad conspiracy theory led by an unknown, assumed intelligence community insider and claiming there to be a cabal of elite pedophiles hatching global conspiracies, has gained enough worldwide traction to be supported by multiple political figures and indirectly supported by President Donald Trump (Liptak, 2020). This situation presents a unique variance on the history and norms of whistleblower situations in that Q’Anon supporters claim to be “blowing the whistle” on something entirely assumed or speculated. When compared to the reality of whistleblower situations both past and present, these speculations create a complete variance.