Do you have employees who work alone? Routinely? Periodically? Occasionally? You might have a late shift worker who runs the warehouse alone, or a maintenance worker who goes on the roof to repair an air conditioning unit alone, or a worker in a remote lab conducting tests with chemical agents alone. To what type of hazards are these folks exposed? What type of controls should be implemented?

Almost every employer needs a formal Work Alone? policy that:

2) Defines steps to take such as communication systems required, or reporting in periodically, or having someone check on the employee periodically when employees are allowed to work alone on highly hazardous jobs such as working with corrosive chemicals, high voltage, or testing and positioning of machinery.

3) Establishes other controls such as emergency signaling and emergency response and rescue.

Over the years, I have investigated several incidents where an employee was working alone and was caught in machinery, trapped and could not get away, or was splattered with acid when a chemical reaction went wrong. Having a work buddy nearby or a communication or signaling device within reach could have prevented these incidents from becoming more severe.

In one case, an employee was injured while working alone in a far corner of the warehouse cleaning up the area for about four hours. He was exposed to moving machinery, electrical equipment, harsh chemicals, excessive noise, heat, and vermin such as spiders. In addition, we learned that this employee has hearing loss and could not hear the emergency alarm if it had sounded.

In another example, a park ranger in a national park in the western U.S. was hurt while repairing the walkway through an area of the park. He was exposed to electrical tools, running water, excessive heat (about 95 degrees that day), and heavy lifting. He was a mile or so from the ranger station without a working partner. Occasionally, a hiker would walk by, but on this hot day, that seldom happened.

These examples show the need for communication devices, another co-worker, or having someone check on employees periodically. 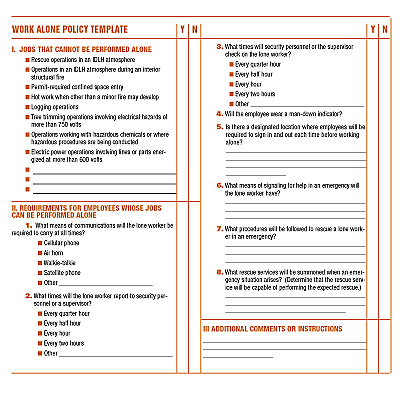 It is quite acceptable for employees to work alone (unless OSHA prohibits it). Many times these employees are not really alone. For example, police officers and letter carriers both work among the public most of the day, or usually have communication devices. For the police officers and letter carriers, being among public citizens and communication devices are reasonable protection should something go wrong.

But most fixed site jobs in factories, warehouses, and buildings expose employees to hazards when there may not be other people around. When this is the case, a plan (or Work Alone? policy) should be followed. This plan should include consideration of such steps as: