The rescue in October 2010 of 33 miners trapped for more than two months after a partial collapse of the San José Mine in Chile is revisited in “Against All Odds: Rescue at the Chilean Mine,” a multimedia exhibition that opened at the Washington, D.C. National Museum of Natural History on August 5th— one year to the day after the miners were trapped, according to a press announcement by the Smithsonian-operated museum. 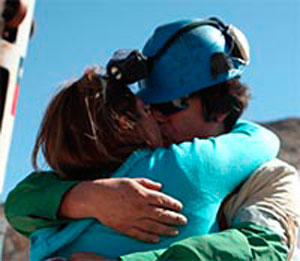 The exhibition recounts the historic event in English and Spanish. Objects on display include a Fénix 2 steel rescue capsule used for testing in the shaft before the rescue, personal mementos and stories from the miners, new video footage and rare rock samples from the mine. The exhibition was produced by the Smithsonian in collaboration with the Chilean government and the miners (“Los Trienta Y Tres”).

“Against All Odds” illustrates the challenges that confronted the government, the anxious waiting and work of the rescuers and the families during a seemingly endless ordeal. Everyday objects and multimedia document a group who never lost hope the miners would be found alive and safely rescued.

“Against All Odds” will include educational programs, tours, lectures and a feature-length documentary produced by the Smithsonian Channel premiering in conjunction with the one-year anniversary of the rescue, Oct. 13. More information is available at www.smithsonianchannel.com.

The exhibition was developed with the Republic of Chile through its embassy in the United States. It was made possible by the generous support of the lead sponsors, Caterpillar Foundation, Caterpillar Global Mining and Finning Chile S.A. Additional support was provided by Layne Christensen Co., as well as 3M, the Chilean American Chamber of Commerce, FedEx Express, Freeport-McMoRan Copper & Gold Inc. and Motorola Solutions Foundation. The U.S. Department of State provided invaluable support for the exhibition.