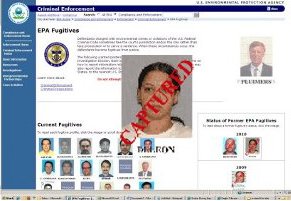 The former owner of the country’s largest asbestos abatement training school was sentenced to prison last week, after having fled the United States after her trial in November 2008. Albania Deleon, 41, formerly of Andover, Mass., was sentenced to 87 months in prison to be followed by three years of supervised release. She was also ordered to pay more than $1.2 million in restitution to the Internal Revenue Service and $369,015 to AIM Mutual Insurance Company.

“Today, justice was served, and Albania Deleon has finally faced the consequences of her crimes. I hope that this sentence sends a strong message to anyone who might contemplate fleeing to avoid punishment, that we do not give up on fugitives, and we will take all necessary means and resources to apprehend and prosecute them,” said United States Attorney Carmen M. Ortiz.

In November 2008, following a three-week trial, Deleon was convicted of a broad range of charges including that she sold training certificates to thousands of illegal aliens who had not taken the mandatory training course. Deleon then placed these unqualified individuals in temporary employment positions as certified asbestos abatement workers in public buildings throughout Massachusetts and New England. Deleon was also convicted of encouraging illegal aliens to reside in the United States, making false statements about matters within the jurisdiction of the Environmental Protection Agency (EPA); procuring false payroll tax returns, and mail fraud. She subsequently fled to the Dominican Republic, where she was eventually tracked down by authorities.

From approximately 2001 to 2006, Deleon owned and operated Environmental Compliance Training (ECT), a certified asbestos training school located in Methuen. ECT normally offered training courses on a weekly basis at its Methuen offices, however, many of the recipients of the certificates never took the required course. Instead, with Deleon’s knowledge and approval, ECT’s office employees issued certificates of course completion to thousands of individuals who did not take the course. These individuals filed the certificates with the Massachusetts Division of Occupational Safety in order to be authorized to work in the asbestos removal industry. Many of the recipients were illegal aliens who wished to skip the four-daylong course so that they would not forego a week’s pay.

Since ECT’s training course records were subject to inspection, Deleon sought to cover up ECT’s practice of issuing certificates to untrained applicants by having the applicants sign final examination answer sheets that already had been completed and graded, which she maintained in ECT’s files. Based on the evidence at trial and information supplied by the Division of Occupation Safety, ECT issued training certificates to over 2,000 untrained individuals.

Deleon is the fifth environmental criminal captured since the EPA fugitive website was launched in December 2008.