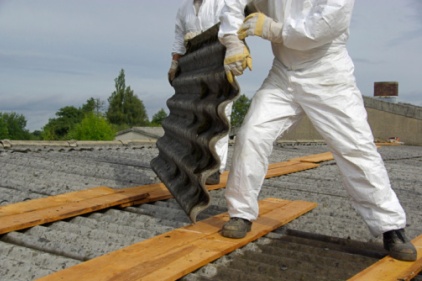 An Illinois man has been sentenced to ten years in federal prison for the illegal removal, handling and disposal of asbestos from a Kankakee building in August 2009. Duane “Butch” O’Malley, 59, of Bourbonnais, was also ordered to pay a fine of $15,000 and restitution of $47,086 to the EPA for costs related to the clean-up of illegally disposed asbestos.

Asbestos is a mineral fiber that has been used commonly in a variety of building construction materials. When asbestos-containing materials are damaged or disturbed by repair, remodeling or demolition activities, microscopic fibers become airborne and can be inhaled into the lungs, where they can cause serious health problems, including lung cancer and mesothelioma.

“The defendant’s actions endangered the health of his workers and the surrounding community,” said Cynthia Giles, assistant administrator for EPA’s Office of Enforcement and Compliance Assurance.

“To increase his profits, a jury found that O’Malley knowingly disregarded federal environmental laws that require asbestos-containing materials be safely removed and properly disposed,” said U.S. Attorney Jim Lewis, Central District of Illinois. “This sentence is a consequence of the defendant’s flagrant disregard for his workers, the public, and the environment in exposing them to dangerous airborne asbestos fibers.”

During O’Malley’s trial, the government presented evidence that O’Malley, owner and operator of Origin Fire Protection, was hired to remove asbestos-containing insulation from pipes in a five-story building that was owned by Michael J. Pinski through his company, Dearborn Management, Inc. Evidence was presented that neither O’Malley nor his company was trained to perform the asbestos removal work and that O’Malley agreed to remove the asbestos insulation for an amount that was substantially less than a trained asbestos abatement contractor would have charged to perform the work. Further, O’Malley arranged for James A. Mikrut to recruit and oversee workers to remove the asbestos.

O’Malley violated a number of provisions of the Clean Air Act (CAA) and EPA regulations, including failure to properly notify the EPA; failure to have trained on-site representatives present; failure to ensure the asbestos insulation was adequately wetted while it was being stripped and removed; failure to mark vehicles used to transport the asbestos containing waste material and failure to deposit the asbestos in a waste disposal site for asbestos.

Instead, the asbestos insulation was stripped from the pipes while dry, and then placed in more than 100 large, unlabeled plastic garbage bags. The bags were then dumped in an open field in Hopkins Park, resulting in soil contamination and exposing the workers hired by O’Malley to dangerous asbestos-laden dust.

O’Malley was charged in June 2010 with five felony violations of the CAA, along with Michael J. Pinski, 42, of Kankakee, Ill., and James A. Mikrut, 49, of Manteno, Ill. Pinski entered a plea of guilty on Aug. 19, 2011, to one count of violation of the Clean Air Act. Mikrut pleaded guilty on Aug. 24, 2011, to five counts of violation of the CAA. The sentencing hearings for Pinski and Mikrut will be scheduled at a future date.