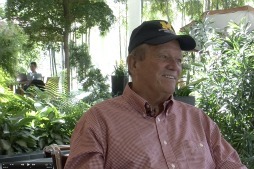 Leo Staudacher, 69, says he’ll never root against the Wolverines again after suffering a cardiac arrest at the University of Michigan-Notre Dame game Sept. 10.

His heart stopped beating during the second quarter of the game that drew a record-setting attendance of 114,804 to the U-M stadium. Staudacher felt a sharp pain in his chest and shoulder and thought it was indigestion or heartburn, but after sitting down, he leaned forward and passed out in the stands.
Fortunately those around him knew CPR. Dentist Marvin Sonne began chest compressions, while others called for help from the emergency medicine team stationed at the stadium.

“My family watched while they shocked me with the defibrillator,” says Staudacher who was with his sons, ages, 45, 48 and 50. “But it was the fans and their prompt CPR that saved my life.”

Sonne, who has known CPR for more than 30 years, said it's only the second time he's ever used the life-saving training and the first time he ever sat in the stadium's Section 6, where the cardiac arrest occurred. "I was in the right place at the right time," he says.

CPR provides blood flow to the heart and brain and increases the likelihood that a shock delivered by an automated electric defibrillator will restore a normal heart rhythm.

They respond to cardiac arrest or intoxicated spectators and "whatever else comes with providing medical care for, what is in essence, a temporary city," Lowell says.

HVA staffs golf cart ambulances that can bring spectators to the 18-bed first aid station. The team had to use the AED multiple times as Staudacher lay in the stadium. Staudacher was transported to the University of Michigan Health System for treatment.

In the cardiac lab, Chetcuti inserted a stent to open Staudacher's blocked artery -- a time-sensitive procedure that can save heart muscle and quality of life. But in this case, also in time for Staudacher to watch part of the last quarter of the game from his hospital bed. U-M won in the final two seconds, 35 to 31.

His family has always gone to great effort to watch Notre Dame play. He says, in the 1920s, his father would drive from Bay City to South Bend, Ind. to see the Fighting Irish take the field.

“The American Heart Association estimates that 295,000 people in the United States suffer sudden cardiac arrest outside the hospital setting and only 8 percent survive,” says Steven Kronick, M.D., M.S., associate service chief and clinical assistant professor in the Department of Emergency Medicine at the U-M Health System. “But bystander CPR can double, or triple, chances for survival.”

U-M experts support having AEDs available in schools and the training of coaches and other school personnel on use and maintenance of the devices. Yearly training in basic life support or CPR for coaches and trainers can help them respond as quickly as possible in an emergency.

Emergency response training programs have the added benefit of not only improving a school’s ability to respond to an emergency that occurs on the sports field but to any emergencies that occur on school property. It will also prepare individuals who will take their emergency response skills to their home and to their community.