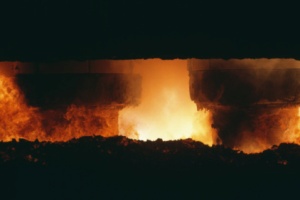 OSHA has cited ABC Coke in Birmingham, Alabama for 27 safety and health violations following the death of a worker in March.

At the foundry coke production facility, coke ovens are filled from above by means of transport vehicles, which drop coal down through chutes into the ovens. In the fatal accident, a coal chute became jammed and the operator left his controls to attempt to un-jam it. Through miscommunication, another employee took the controls and moved the transport vehicle, which hit the worker, crushing him between a guardrail and the jammed coal bin chute.

OSHA cited ABC Coke for one serious safety violation related to the fatality: failing to develop and utilize lockout/tagout procedures for the energy source of the coal transport vehicle, which would have prevented it from moving while the worker was un-jamming the coal chute.

One other-than-serious safety violation was cited for failing to mark the approved load rating for a storage room in a building or other structure.

"This fatality could have been prevented had the employer ensured that proper procedures were developed and implemented," said Roberto Sanchez, OSHA's area director in Birmingham.
Proposed penalties total $124,000.

ABC Coke, which employs about 1,200 workers, is a division of Drummond Co.