Focus is on three lab incidents -- two of them fatal 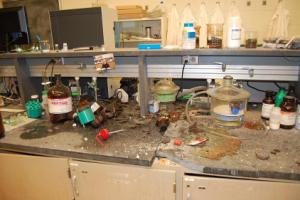 The U.S. Chemical Safety Board (CSB) has released a new safety video on the potential hazards associated with conducting research at chemical laboratories in academic institutions.

The 24-minute video focuses on three serious laboratory accidents:  the death of a lab research assistant in 2008 in a flash fire at the University of California Los Angeles (UCLA); a death by accidental poisoning of a highly regarded Dartmouth College professor in 1997; and a 2010 explosion at Texas Tech University (TTU) that severely injured a graduate student, who lost three fingers in the blast and suffered eye damage.

Entitled  “Experimenting with Danger” the video notes that the CSB  has collected preliminary data on 120 explosions, fires, and chemical releases at university laboratories and other research facilities that occurred around the country since 2001, causing deaths, serious injuries, and extensive property damage.

The video provides extensive information on the CSB’s investigation of the TTU accident and the resulting case study.  The report, issued during a webinar on laboratory safety yesterday and now available online at www.CSB.gov, includes six key safety lessons the Board believes apply to academia as a whole.

In the video, CSB Chairperson Dr. Rafael Moure-Eraso, says, “Research conducted at university laboratories is often on the forefront of technology and innovation.  It is important that this research continues and thrives.  But it must be done within a strong safety culture where preventing hazards is an important value.”

The three laboratory accidents are depicted through the use of illustrations.  Dr. Naveen Sangji, the sister of Sheharbano “Sheri” Sangji, who died of injuries from the UCLA accident, says in the video, “A lost life is not just an anonymous loss of life, but real people, and families are profoundly affected.  And safety has to be an absolute priority and the first priority for any laboratory.

TTU vice president for research Dr. Taylor Eighmy, who appears in the video, said, “The video is immensely powerful.  It tells a compelling and poignant story and should be used all the time in every university that has anything to do with laboratory or workplace safety.”

CSB lead investigator Cheryl MacKenzie and investigator Dr. Mary Beth Mulcahy comment extensively on the results of their team’s investigation of the TTU explosion during an experiment with energetic materials being conducted under a funding agreement with the Department of Homeland Security.

Investigator MacKenzie says, “The CSB is concerned with laboratory safety because it’s an area that appears in comparison to industry pretty unregulated. There is an OSHA laboratory standard but its focus is on exposure hazards and health hazards of the research work being conducted.”

Investigator Mulcahy, who has a doctorate in physical chemistry, notes that at TTU, the injured lab worker had not received any specific, formal training on working with potentially explosive compounds.  “When graduate students go into these new endeavors – a new project, a new process – they need to get specific training and they need to have it ensured and have it assessed – do they really understand what it is they're doing?” she asks.