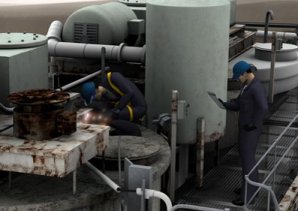 The U.S. Chemical Safety Board (CSB) has released a new safety video detailing a fatal 2010 hot work accident that occurred at the DuPont facility near Buffalo, New York.

The video, entitled “Hot Work: Hidden Hazards” features a computer animation showing how hot work being conducted on top of a tank led to a deadly explosion that killed one contractor and injured another.

CSB Chairperson Rafael Moure-Eraso said he hoped the dramatic depiction will result in greater emphasis in safety during hot work activities like welding and grinding.

In the video, Dr. Moure-Eraso notes that, “The tragic explosion at the DuPont facility exposed weaknesses in how process hazards were analyzed and controlled. The result was the death of a welder in a preventable hot work accident.” Hot work, often seen as a routine activity, can prove deadly if fire and explosion hazards are overlooked.

The 11-minute video details the events leading up to the accident noting that although DuPont personnel monitored the atmosphere above the tank, no monitoring was done to see if any flammable vapor was inside the tank. The CSB investigation found the hot work ignited the vapor as a result of the increased temperature of the metal tank, sparks falling into the tank, or vapor wafting from the tank into the hot work area. The welder died instantly from blunt force trauma, and a foreman received first-degree burns and minor injuries.

CSB Investigator Mark Wingard says in the video, “We found that the contractors did obtain hot work permits for welding, but those permits were authorized by DuPont employees who were unfamiliar with the specific hazards of the process and did not require testing the atmosphere inside the tanks.”

The CSB released its final report and formal safety recommendation on April 19.