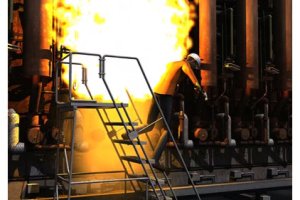 The U.S. Chemical Safety Board (CSB) yesterday released a new safety video depicting three accidents involving combustible iron dust at the Hoeganaes Corporation in Gallatin, Tennessee. The video, entitled “Iron in the Fire,” features three computer animations showing how fine metal particles were lofted and ignited in two incidents, and how a hydrogen explosion and subsequent flash fires caused by lofted metal dust killed a total of five workers and injured three others.

In the video, CSB Chairperson Rafael Moure-Eraso notes that “Combustible dust is a serious workplace hazard across the country. Since the Chemical Safety Board was established in 1998, three of the deadliest accidents we have investigated have been combustible dust explosions.”  The chairman said he hopes the video will drive home the point that dust fires and explosions continue to claim lives and destroy property in many industries. “More must be done to control this hazard,” Dr. Moure-Eraso says, adding “No more lives should be lost from these preventable accidents.”

“Iron in the Fire” begins with a poignant remark by Christina Sherburne, wife of one of the workers killed at Hoeganaes, who spoke at a CSB public meeting on the investigation. Referring to her son and the aftermath of the accident that fatally injured her husband, Wiley Sherburne, she says, “Everything was changed that morning. And when Cody and I got to the hospital the first thing the doctors told us walking in the door was he was burned 95% of his body, and ‘we don’t think he’s going to make it.’ There’s nothing you can say to that.”

The 14-minute video shows that after the first flash fire on January 31, 2011, which killed two workers, the CSB launched an investigation, discovering large quantities of the combustible metal dust on elevated surfaces, equipment, and floors in many working areas of the plant.  Then on March 29, another flash fire occurred, seriously injuring a worker. Investigators then collected iron dust samples and had them tested.

At a news conference in Tennessee on May 11, the CSB released laboratory test results demonstrating the combustibility of even small amounts of the iron dust when dispersed in air in the presence of an ignition source. But as the video notes, despite the CSB evidence, and the company’s own test results done previously, the company did not institute adequate dust control measures or after-the-fact housekeeping cleanup measures.

The video depicts the scene just sixteen days after the CSB released its test results – on May 27th – when a hydrogen explosion erupted in the plant, after the gas began leaking from a corroded furnace pipe. The blast shook loose iron dust accumulations from the upper reaches of the building which ignited and rained down on workers.  The explosion and ensuing fire killed three and injured two others. The video reports that the CSB investigators found the company did not require atmospheric testing for hydrogen or other explosive gases.

CSB Lead Investigator Johnnie Banks says in the video, “It is a tragedy that five lives were lost at Hoeganaes from these accidents. The CSB believes that adhering to recommended industry practices will greatly reduce the potential of a future dust fire or explosion.”