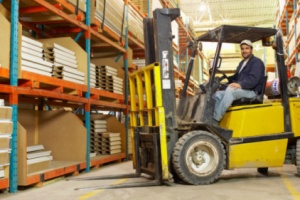 A complaint from a warehouse workers union brought Cal/OSHA's attention to two warehouse companies in Chino -- and resulted in a quarter of a million dollars worth of citations against those companies.

Cal/OSHA found a dual-employer relationship—where one employer hires workers and provides them to another employer—at three of the four warehouses inspected. In this situation, both employers are potentially liable for violations of safety and health regulations that are meant to prevent workers’ injuries or illnesses. The most common dual-employer situation is a Professional Employer Organization (PEO) that provides an employee to work at a worksite under the supervision and control of another company. PEOs are prevalent in the warehousing industry.

“When employers use a contractor for their staffing needs, they are not released from their responsibilities to provide a safe workplace,” said Cal/OSHA Chief Ellen Widess. “As dual employers sharing responsibility for training and worker safety, both National Distribution Centers and Tri State Staffing were responsible for ensuring that all employees are protected on the job.”

The warehouse inspections were prompted by complaints received from Warehouse Workers United and a worker’s heat illness injury in August of 2011.

In the latter case, Cal/OSHA found that a 49-year-old warehouse employee had become dizzy and nauseous while working in 90-degree temperatures inside the building. The employer failed to recognize the symptoms as heat-related or address conditions that led to the worker’s illness, issues that are required to be addressed in an effective Injury and Illness Prevention Program (IIPP).

Every employer in the state of California is required to have an IIPP that addresses the safety hazards associated with their specific work site. If heat is a hazard in an indoor workplace, a common problem in warehouses, then the IIPP is required to address preventive measures to protect employees from the heat.

“It’s not just outdoor workers who are vulnerable to heat illness,” said Cal/OSHA Chief Widess. “It can also happen indoors in a warehouse on a hot day. Every California employer needs to be aware of heat illness symptoms so that appropriate steps can be taken to prevent serious on-the-job injuries or death.”