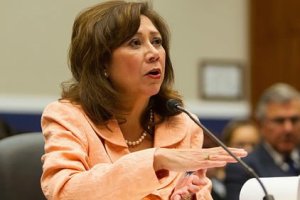 Preserving worker protection programs despite challenging economic times is crucial, according to Labor Secretary Hilda Solis, who testified this week before Congress about her department's 2013 budget request.

Appearing before the House Appropriations Subcommittee on Labor, Health and Human Services, Education and Related Agencies, Solis addressed priorities for both the Mine Safety and Health Administration (MSHA) and OSHA.

The budget request includes $16.9 million targeted toward reducing the backlog of contested citations at the Federal Mine Safety and Health Review Commission (FMSHRC).

"We must continue our efforts in this area to ensure that we are holding mine operators accountable if they fail to meet their legal and moral responsibility to operate safe mines," said Solis. "If we do not reduce the backlog, some mine operators will continue to contest violations as a way of 'gaming the system' to delay payment of civil penalties and avoid scrutiny under MSHA's existing pattern of violation regulations. This will lead to even higher contest rates and potentially unsafe mines."

Solis said the total MSHA budget of $372 million will enable the agency to focus on its highest priority activities, including inspections in the coal and metal/non-metal enforcement activities.

The request of $565 million for OSHA includes an additional $5 million for enforcement of the 21 whistleblower protection programs the agency administers. It also maintains the significant increase provided in FY 2012 for the small business consultation program.

Although Solis said there's general agreement on the need for significant deficit reduction, "the Ryan budget is not the answer.

"While many of the proposals require further analysis, it is very clear that this budget does not ask all Americans to do their share to get our fiscal house in order and create an economy that is built to lastIt sets the table for cuts in non-defense discretionary funding that are nearly three times as deep as the cuts under sequestration."