Maine shipbuilder faces more than $171,000 in fines for fall, other hazards 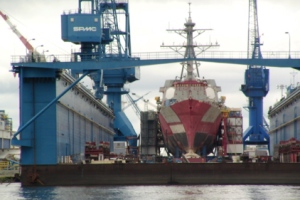 OSHA has cited Bath Iron Works, a General Dynamics company, for alleged repeat and serious violations of workplace safety standards at its Bath shipyard in Maine. The shipbuilder faces a total of $171,300 in proposed fines following a safety inspection by OSHA's Augusta Area Office.

The inspection, which was conducted under OSHA's Site-Specific Targeting Program and a local emphasis program focusing on hazards in ship- and boat-building and repair, identified a variety of fall, mechanical and electrical hazards.

A serious violation occurs when there is substantial probability that death or serious physical harm could result from a hazard about which the employer knew or should have known. A repeat violation exists when an employer previously has been cited for the same or a similar violation of a standard, regulation, rule or order at any other facility in federal enforcement states within the last five years. In this case, the repeat violations are similar to tripping and fall hazards cited in 2008.

"We've focused on this industry because establishments primarily engaged in ship- and boat-building and repair in the state of Maine have higher-than-average injury and illness rates," said William Coffin, OSHA's area director for Maine. "A proactive, sustained, effective and ongoing effort by employers to identify and eliminate hazards such as these is necessary for employees' safety and well-being."