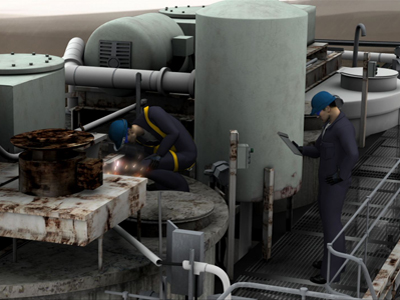 In a draft report released today at a news conference in Buffalo, the U.S. Chemical Safety Board (CSB) determined that an explosion that killed one and injured another contract welder on November 9, 2010, was caused by the ignition of flammable vinyl fluoride inside a large process tank, a hazard which had been overlooked by DuPont engineers.

The CSB found that that sparks or heat from the welding, which took place on top of the tank, most likely ignited the vapor. The CSB said a primary cause of the blast was the failure of the company to require that the interior of storage tanks – on which hot work is to be performed – be monitored for flammable vapor. A proposed recommendation urges DuPont to require monitoring the inside of storage before performing any hot work, which is defined as welding, cutting, grinding, or other spark-producing activities.

The Board will vote on the report and its recommendations at a CSB public meeting tonight at 6 pm at the Embassy Suites located at 200 Delaware Avenue in Buffalo. A CSB 11-minute safety video, entitled “Hot Work: Hidden Hazards,” utilizing computer animation to depict the sequence of events leading to the tragedy, will be released at www.CSB.gov, subsequent to the board vote on the report.

Noting the CSB issued a safety bulletin on the dangers of hot work in March 2010, CSB Chairperson Rafael Moure-Eraso said, “I find it tragic that we continue to see lives lost from hot work accidents, which occur all too frequently despite long-known procedures that can prevent them. Facility managers have an obligation to assure the absence of a flammable atmosphere in areas where hot work is to take place. Explosion hazards can be eliminated by testing inside tanks as well as in the areas around them.”

The accident occurred at the DuPont chemical plant in Tonawanda, a suburb of Buffalo, which employs approximately 600 workers. The facility produces polymers and surface materials for countertops, sold under the trade names Tedlar® and Corian®. The process for making Tedlar involves transferring polyvinyl fluoride (PVF) slurry from a reactor through a flash tank and then into storage tanks. The tanks were also inter-connected by an overflow line. The CSB found the company erroneously had determined that any vinyl fluoride vapor that might enter the tanks would remain below flammable limits.

Days before the incident the process had been shut down for tank maintenance due to corrosion on tank agitator supports. The fill lines were locked out for safety. Tanks 2 and 3 were repaired and the process restarted, but work on tank 1 was delayed because the necessary parts were not available. Finally, a contract welder and foreman were engaged to repair the agitator support atop tank 1. Although tank 1 remained locked out from the main process, the overflow line remained open which connected tank 1 to tanks 2 and 3. The CSB determined that flammable vinyl fluoride flowed through the overflow line into tank 1 and accumulated to explosive concentrations. Investigators found that while a facility hot work permit was issued for the task, the DuPont personnel who signed it were not sufficiently knowledgeable about the Tedlar chemical process.

Although DuPont personnel monitored the atmosphere above the tank prior to authorizing hot work, no monitoring was done inside the tank to see if any flammable vapor existed there. The CSB investigation found the hot work ignited the vapor as a result of the increased temperature of the metal tank, sparks falling into the tank, or vapor wafting from the tank into the hot work area.

The explosion blew most of the top off the tank, leaving it and the agitator assembly hanging over the edge. The welder died instantly from blunt force trauma, and the foreman received first-degree burns and minor injuries.

CSB Team Lead Johnnie Banks said, “Our investigation found that DuPont’s process hazard analysis incorrectly assumed that vinyl fluoride in the Tedlar process could not reach flammable levels in the slurry tanks. And, critically, DuPont personnel did not properly isolate and lock out tank 1 from tanks 2 and 3 prior to authorizing the hot work. The flammable vapor was able to pass through the overflow line into the tank the welder was working on, unknown to him or to the operators who signed off the hot work permit.”

The CSB also determined that DuPont should have included the three storage tanks as part of the Tedlar process covered by OSHA Process Safety Management rules. Yet on the day of the accident, a compressor failure led to higher concentrations of vinyl fluoride vapor in the polyvinyl fluoride slurry. Furthermore, a U-shaped seal loop on the flash tank overflow line had a “fishmouth” split in the pipe that could emit vinyl fluoride vapor. Engineers concluded further operation with the broken seal loop presented no hazards, but the CSB determined the pipe split provided a potential pathway for flammable VF gas to enter the tanks.

The Board will consider and vote on several proposed recommendations to DuPont. These include enforcing safety procedures for hot work permits and ensuring explosion hazards associated with hot work activity are recognized and mitigated; revising corporate procedures to require all process piping and vent piping be positively isolated before authorizing any hot work, and to require air monitoring for flammable vapor inside tanks and other containers where hot work is to be performed.