Distracted driving? There’s an app for that 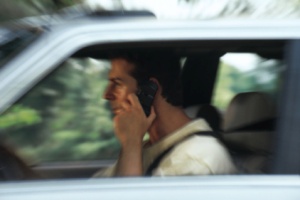 Every day in the U.S., 9 people are killed and more than 1,060 are injured in crashes that involve distracted driving, according to the Centers for Disease Control and Prevention (CDC).

Using a cell phone, texting, and eating are all forms of distracted driving, but so are in-vehicle technologies such as navigation systems. The CDC says texting while driving is the most dangerous, because it combines all three types of distraction: visual; manual and cognitive ( taking your mind off what you are doing).

Inexperienced drivers under the age of 20 have the highest proportion of distraction-related fatal crashes.

Americans engage in distracted driving far more than their European counterparts. A CDC study compared the U.S., Belgium, France, Germany, the Netherlands, Portugal, Spain, and the United Kingdom and found:

On October 27, 2010, the Federal Motor Carrier Safety Administration enacted a ban that prohibits commercial vehicle drivers from texting while driving.

"The difference between the American and European statistics is shocking but I’m alarmed even by the European numbers," said Jani Spede, CEO of The Canary Project, which developed the Canary app for iPhones and Android phones. "Technology is available to help solve this problem and we must all take advantage of it, worldwide. It’s the only way to rewire our brains and end dangerous behavior."

Any time a person uses a smartphone in any way (including talking, texting, tweeting, surfing the web, etc.) while traveling at least 12 mph, the Canary app logs that activity and reports it to an accountability partner (e.g. parent, spouse, friend or even an employer).

An app for iPhone and Androids is being touted as a way for parents and employers to monitor smart phone use. Any time a person uses a smartphone in any way (including talking, texting, tweeting, surfing the web, etc.) while traveling at least 12 mph, the Canary app logs that activity and reports it to an “accountability partner,” such as a parent, spouse or employer.

"Users find the resulting reports sobering, because most have no idea how often they are risking their lives and the lives of others," said Jani Spede, CEO of The Canary Project, which developed the app. "Also, the knowledge that someone else will know about their actions helps them resist the temptation to talk or text while driving."

The Canary app, which monitors up to ten smartphones, can be downloaded from the iTunes and Google Play app stores and requires a one-time $9.99 subscription following a free seven day trial period.

A corporate version is also available to allow employers to monitor compliance with company driving policies.