Can you really catch yourself if you fall? 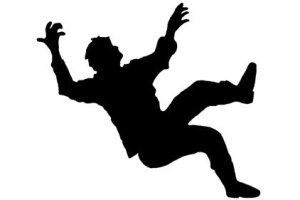 The average person’s reaction time is half a second. In that time you fall 4 feet.

As you fall, gravity pulls you down and your speed quickly increases. That means your impact force increases too. And, once you start falling, you will stop only when you hit a lower surface.

Still think you can catch yourself?

A person who weighs about 200 pounds and falls just 6 feet will hit the ground with almost 10,000 pounds of force. That’s just too much for anyone’s grip.

Catching yourself during a fall is a Hollywood fantasy.

Here are the real stories:

A 54-year-old tradesman was working on a grocery store, constructing a wall near a stairwell leading to the basement. He stood on the top rung of an 8-foot ladder to align a chalk line and fell. He landed about 16 feet below, striking the concrete stairs leading into the building’s basement. He was carried off the job site in a body bag.

A 46-year-old sheet metal worker was working from a stepladder, adding a fire damper to a previously installed sheet metal plenum at a hospital. He had his right foot on the fifth step, less than 5 feet off the ground, and his left foot one step above. Working with his feet on two different steps put an uneven weight on the ladder. A co-worker said the ladder spun around and caught the sheet metal worker’s legs in the steps. He fell and struck his head on the edge of a metal floor plate. With one false move, his life was cut short.

A 37-year-old carpenter and two co-workers were working outside on a residence. Out of his co-workers’ sight, the carpenter was standing on a stepladder, affixing blocks of wood to the ceiling rafters of a covered porch. He apparently lost his balance and fell from the ladder. He struck his head on a concrete block retaining wall about 6 feet below the open-sided porch floor. When his co-workers found him, he was unconscious but breathing. The foreman called an ambulance. The carpenter was stabilized and transported to the hospital. Two days later, he was pronounced brain dead. Life support was removed and he died that day.