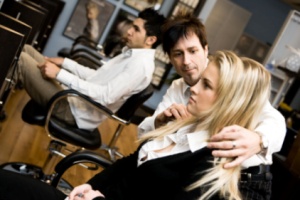 The study, titled “Formaldehyde Exposure During Simulated Use of a Hair Straightening Product,” investigated the Brazilian Blowout Acai Professional Smoothing Hair Solution and discovered that cosmetologists, as well as customers, could be exposed to potentially dangerous levels of formaldehyde, a carcinogen, from the product.

“Our study found that using Brazilian Blowout, without proper engineering controls like local exhaust ventilation, could expose hairdressers and their clients to formaldehyde at levels above the short-term occupational exposure limits,” said Michelle Stewart, who conducted the study as a graduate student in the School of Public Health at the University of California, Berkeley.

According to Stewart and her colleagues, breathing-zone formaldehyde concentrations during some treatment steps in the study exceeded the OSHA 15-minute time-weighted average (TWA) exposure limit of 2 parts per million (ppm) and, during all steps, exceeded the NIOSH recommended ceiling limit of 0.1 ppm. The product used in the simulation was found to contain formaldehyde at 120 mg/mL.

“While installing local exhaust ventilation is a traditional exposure control, that solution may not be feasible in small salons due to the cost of ventilation systems, permits, installations, ongoing maintenance and efficacy checks,” said Stewart. “The recommendation is that salons use products containing no more than 0.1% formaldehyde, but the product we investigated contained 12% formaldehyde.”

Stewart’s study was triggered by a dispute in 2011 between the Oregon OSHA and GIB LLC, the California-based manufacturer of the Brazilian Blowout product.  The Oregon OSHA had performed laboratory and field studies demonstrating that the product contained formaldehyde at levels that overexposed cosmetologists to the carcinogen, subsequently sparking various regulatory requirements.

Click here to listen to a podcast about the Brazilian Blowout hair treatment and what salon workers and patrons are exposed to during this hair straightening process.