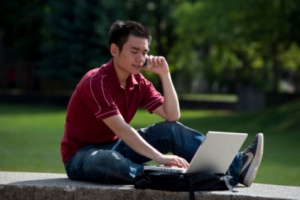 One college in Maine, Unity College, known as America's Environmental College, is modeling a new, more effective path for higher education. As the first college in the United States to embrace sustainability science as its central framework, Unity College is training students in the leading-edge of 21st century transdisciplinary (collaborative) environmental problem solving.

The College has increased its incoming class by 18 percent above 2012. Seventy percent of the entire study body is choosing to live on campus, an impressive figure by general industry standards, says Dr. Melik Peter Khoury, senior vice president for external affairs.

Two of the most prominent factors that explain the increase, Melik says, are Unity College's focus on sustainability science and its improved academic profile, with the College being named to the 2013-14 Colleges of Distinction Guide, among other academic related honors received.

Khoury reports that Unity College's gender balance and geographic diversity of the student body have never been better.

"The College is also more geographically diverse than ever before, with the overall student body attracting students from 39 states."

"Unity College is enjoying historic popularity in part because of its first-in-the-nation focus on sustainability science, which touches every aspect of the science-based, liberal arts experience we are offering," noted President Stephen Mulkey.  "We are training students to gain the skills that are relevant not just for their first job after graduation, but for their fifth. Our approach represents a sea change in higher education, addressing education in an expansive, comprehensive way that is turning the outdated lecture models that still plague higher education upside down."

President Mulkey says that students deserve more from their college experience than lectures, laboratories, and a diploma at commencement. They deserve to be full partners in their own education, working within a supportive system that helps them make important connections across the disciplines, a fundamental feature of a Unity College education.  Students pursue hands-on projects that link lessons from classes across the spectrum. They enjoy opportunities to gain valuable experience before they graduate, and many students study alongside faculty members, or are employed by academic studies.