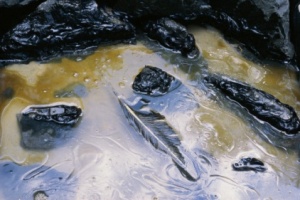 Researchers studying a small sampling of workers who’d helped clean up the 2010 Gulf of Mexico oil spill found significantly altered blood profiles that could indicate an increased risk of certain kinds of cancer.

Those exposed to the hazardous chemicals in oil and dispersants had lower platelet, blood urea and creatinine counts and higher hemoglobin and hematocrit levels – findings related to a greater risk of developing liver cancer, lymphoma, myelomas and leukemia, among other diseases.

Oil contains benzene, a known carcinogen that is easily absorbed through the skin.

The study by Mark A. D'Andrea, MD, FACRO and G. Kesava Reddy, PhD, MHA was published in the September issue of The American Journal of Medicine. It encompassed symptoms reported by clean-up workers in the two years following the spill that included headaches, rashes, chronic coughs and shortness of breath.

More than 170,000 people helped clean up after the spill from BP’s Macondo well. Although protective gear was widely distributed, the hot and humid weather of the region may have caused some people to remove protective clothing.