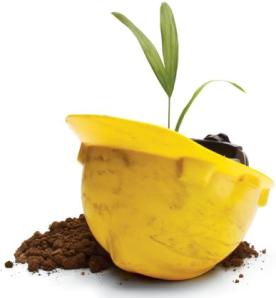 MSA, the global leader in the development, manufacture and supply of safety products that protect people's health and safety, and the largest producer of industrial hard hats in North America, has developed the world’s first “green” protective hard hat manufactured from sugarcane.

“By developing a hard hat sourced from sugar, we are effectively reducing the overall carbon footprint associated with the life-cycle of this product,” said Eric Beck, MSA’s Global Director of Strategic Marketing.  Mr. Beck explained that through the natural process of photosynthesis, sugarcane cultivation captures CO2 from the atmosphere, thereby reducing greenhouse gas emissions.  In fact, according to a 2007 eco-efficiency study conducted by Fundacao Espaco Eco, for every ton of green HDPE produced, approximately 2.5 tons of carbon dioxide are captured from the atmosphere and environment.

Just like MSA’s market-leading, traditional V-Gard hard hats, the V-Gard GREEN protective hard hat meets the company’s rigorous performance standards as well as those defined by ANSI Z89.1 and CSA Z94.1.  “The sustainable benefits of using ‘green’ HDPE in a hard hat are what initially captured our interest,” Mr. Beck said.  “But at the end of the day, the hard hat has to provide the same high level of head protection that our V-Gard brand is known for around the world.  That’s what makes this product option so attractive.”

Green high-density polyethylene is also 100 percent recyclable in the same stream as conventional HDPE, making it suitable for reuse in non-safety products and further enhancing the sustainability benefits of the new hard hat.  Like traditional V-Gard hard hats, the new V-Gard GREEN hard hat will be marked with a recycling label to further remind and educate users to recycle their helmet at the end of its use cycle.

In recognition of MSA’s leadership and innovation in head protection, Frost & Sullivan, a global research organization of 1,800 analysts and consultants who monitor more than 300 industries and 250,000 companies worldwide, recently selected the V-Gard GREEN for its 2013 New Product Innovation Leadership Award.

The MSA V-Gard GREEN hard hat is being launched in the midst of steady growth in the green building industry.  According to an industry report released earlier this year in collaboration with the U.S. Green Building Council and the World Green Building Council, 28 percent of architects, engineers, contractors, building owners and building consultants around the world report an increased focus on sustainable design and construction. The report found that firms are shifting their business toward green building, with 51 percent of respondents expecting more than 60 percent of their work to be green by 2015.

“With the rise in green building and construction projects in general, this is an opportune time to introduce an alternative, sustainable safety hard hat that also helps to reduce carbon emissions and demand for fossil fuels in product manufacturing,” says Mr. Beck.  “With millions of of hard hats manufactured and sold annually in the United States, Canada and Mexico, the V-Gard GREEN hard hat provides those in the construction industry as well as those working in the utility, energy and industrial fields a more sustainable choice that protects both people and planet.”

The technology to produce this new helmet was deployed at MSA’s Brazil operations, in conjunction with Braskem, the world’s largest producer of green thermoplastic resins.  Offering increasingly sustainable products is a pillar of Braskem's global business vision, which includes intensifying its research into renewable chemicals.

MSA will manufacture its V-Gard GREEN hard hat at the company’s Murrysville, Pa., manufacturing facility located near Pittsburgh.  The hard hat will be made available to customers in late September 2013.

Established in 1914, MSA is the global leader in the development, manufacture and supply of safety products that protect people and facility infrastructures.  Many MSA products integrate a combination of electronics, mechanical systems and advanced materials to protect users against hazardous or life-threatening situations. The company's comprehensive line of products is used by workers around the world in a broad range of industries, including the fire service, the oil, gas and petrochemical industry, construction, mining and utilities, as well as the military.  Principal products include self-contained breathing apparatus; fixed gas and flame detection systems, handheld gas detection instruments, head protection products, fall protection devices and thermal imaging cameras. The company also provides a broad range of consumer and contractor safety products through a joint venture with MCR Safety.  These products are marketed and sold under the Safety Works® brand.  MSA, based north of Pittsburgh in Cranberry Township, Pa., has annual sales of approximately $1.2 billion, manufacturing operations in the United States, Europe, Asia and Latin America, and 42 international locations.  Additional information is available on the company’s Web site at MSAsafety.com Information on Safety Works products can be found at www.SafetyWorks.com.