Inventor of Kevlar dies at 90 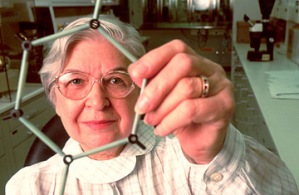 Stephanie Kwolek, the DuPont chemist best known for inventing Kevlar, died June 18 at the age of 90.

Kevlar is considered a “happy accident” within the scientific community. Kwolek and her colleagues at DuPont were attempting to develop a strong synthetic fiber that could be used in tires when she noticed a mixture of a polymer and a solvent that appeared cloudy – quite different from the usual translucent appearance of conventional polymer solutions. Normally the solution would have been discarded as a mistake. However, the scientific curiosity that would lead to her winning multiple awards and honors over the course of her career caused Kwolek to investigate the substance further.

Her formula, which was exceptionally strong and stiff, turned out to be poly-paraphenylene terephthalamide – named Kevlar by DuPont.

Kevlar’s extraordinary strength (five times that of steel) derives from the orientation of the rod-shaped polymer molecules. Kwolek realized that treating the fibers with heat made them even stronger,

Kwolek – who excelled in a male-dominated profession – was awarded DuPont's Lavoisier Medal for outstanding technical achievement. She also won the National Medal of Technology, the IRI Achievement Award and the Perkin Medal and is in the National Inventors Hall of Fame.