Fluoride in the water: Too much of a good thing?

Dan Ross
In the early 1900s, a young dentist named Frederick McKay moved to a Colorado town where the residents’ teeth — though in some cases stained chocolate brown — had far less decay than was typical back then. He and other researchers eventually linked the phenomenon to fluoride in the town’s drinking water – a eureka moment that would usher in what is often called one of the 10 great public health achievements of the 20th century.
Read More

New lookup to tell you what’s in your water

Dan Ross
Want to know what hazards might be lurking in your local water supply? An updated online database launched today by the Environmental Working Group, a research and advocacy organization, provides some answers.
Read More

Soon after Erin Card moved to within two miles of the Radford Army Ammunition Plant in Virginia two years ago, she began to notice threads of smoke that occasionally rose above the heavily wooded site. She started asking about the source, and eventually was stunned by what she learned: Toxic explosives were being burned in the open air. 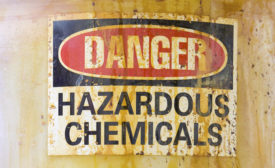 Novel strategy for dealing with toxic contamination: Do nothing