This website requires certain cookies to work and uses other cookies to help you have the best experience. By visiting this website, certain cookies have already been set, which you may delete and block. By closing this message or continuing to use our site, you agree to the use of cookies. Visit our updated privacy and cookie policy to learn more.
Home » Blogs » Thought Leadership » Water safety tip - Summer is here
John Drebinger Jr. is a motivation speaker, print and e-book author, educator and trainer on specific safety topics such as culture change, ownership for safety, and building better communication skills. Visit www.drebinger.com 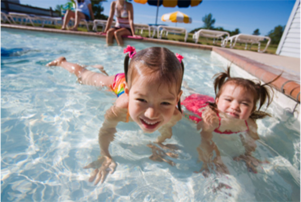 I love all the great ideas I pick up from my clients. I mentioned a few weeks ago before every meeting including conference calls, one of my international consulting clients begins with a safety moment. For today’s call, I offered to give the safety moment before we began. Due to its timely nature, I wanted to share it with you today.

On Saturday, my daughter brought our two grandchildren, Owen, who is 3 years old and Lauren, who is 5 years old, to swim at our house. Lauren has had lessons and is capable of swimming from one end of the pool to the other without pushing off the side. Owen is learning and currently loves our spa, which is about 50 feet from the pool near our bedroom door. He does great in the spa because he can easily stand up anywhere. The danger is when he is in the spa and Lauren is in the pool, your attention is divided.

I have been a trained lifeguard for many years and I can tell you there is only one safe approach. There must be someone watching each of the children. The illusion is you would hear if something is wrong and would be able to quickly run to their aid. At the very first National Safety Council Annual Congress I attended, I learned from a retired Coast Guard instructor when people drown, most of the time they do so quietly.

What is someone who is drowning desperately trying to do? Get air! They are breathing in. Noise happens when you expel air and yell. Because they are out of breath, they often can’t make noise. One of the original Beach Boys, Dennis Wilson, who was a surfer and a great swimmer, drowned at the side of a boat just a few feet from other people at a party. No one saw him go under and no one heard him.

I witnessed this several years ago on a Boy Scout camp out with our troop. I was scoutmaster and serving as the lookout at a troop swim at a public lake. We had a buddy board made up and had about 16 scouts in the water. The lake shore swimming area had about 150 people in or near the water. As I was watching our scouts, I noticed a father with a very young daughter by his side. He was busy talking to a friend on the other side of him when the little girl slipped on the muddy bottom and went under water. I stood up and noted her position as the water was not clear because of the stirred up dirt. Of all the people at the beach, only two of us had seen her disappear. I headed to her location as did the other guy who saw her. We arrived about the same moment about 15 to 20 seconds since she went under water. The other guy reached down into the water and pulled the little girl out. It was then the father’s attention was attained. The father was upset at this guy for grabbing his daughter. I stepped in and explained she had been underwater for at least 20 seconds and this guy just saved her life. We were both thanked and after a quick visual count of my scouts, I went back to my post.

This summer, remind your employees the only safe way for children to be in water is to have someone actually watching them. The same goes for adults.

The previous safety tip is an example of how you can let employees know you really care about them. When you talk about safety off the job they know it isn’t just about saving the company money.

Have a safe summer. I look forward to many miles of sunny bike riding and swimming.